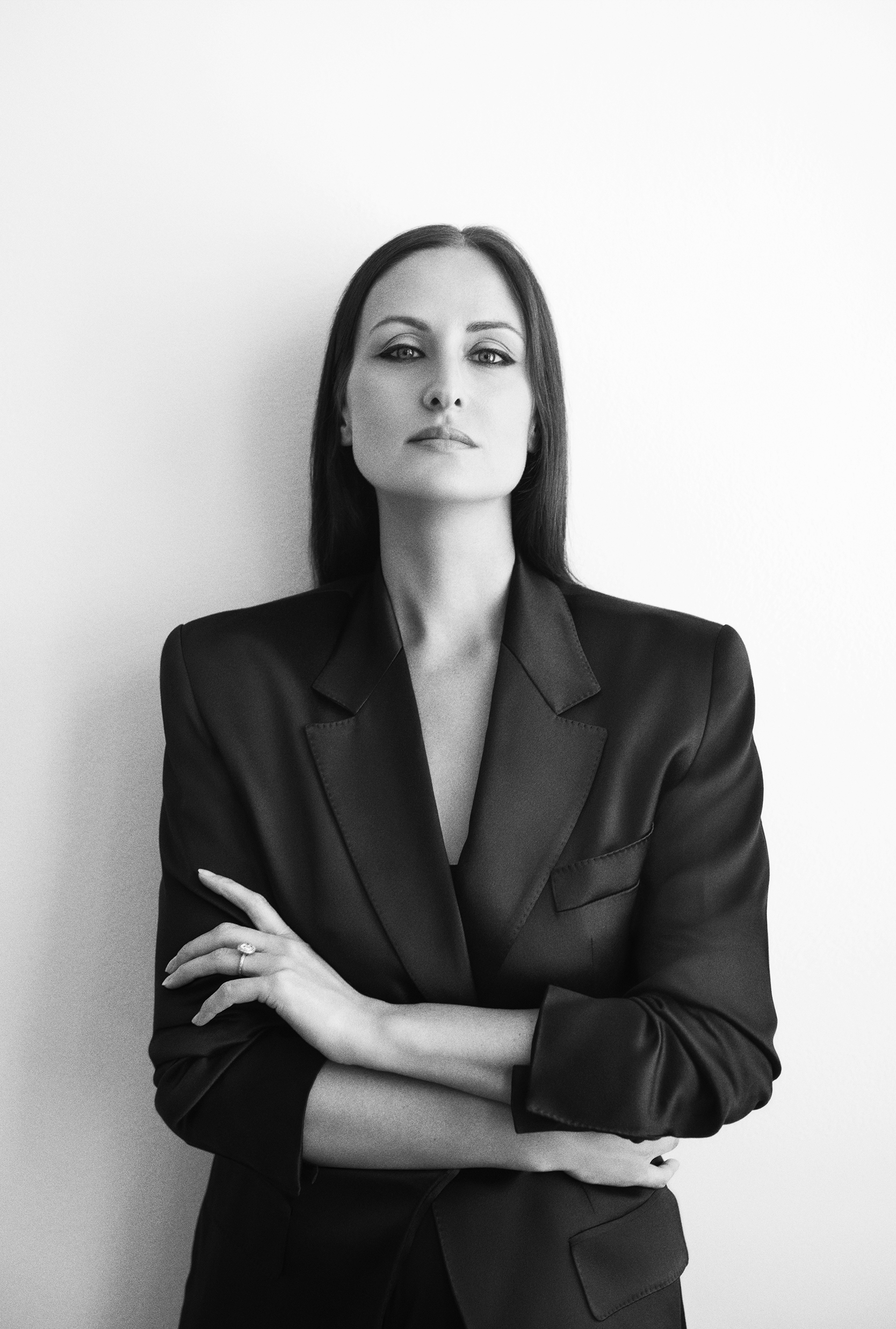 I love women who are hard to define and Lesley M.M. Blume is that kind of woman. A journalist and N.Y. Times best-selling author, she has a wry wit, bold tenacity, and an almost old-school glamour about her–a striking trifecta of personality traits. She has written for magazines such as Vanity Fair and Vogue, the book Everybody Behaves Badly–about the making of Ernest Hemingway’s first novel and the characters who helped shape it (a lot more than Hemingway would have liked to admit), and her latest book, Fallout, her most serious to date, is about the atom bomb and the cover-up around it. “FALLOUT was written as a rallying cry on behalf of our free press at a time when it has been under unprecedented assault,” explains Blume. “I am a journalist; my husband is a journalist, and also a first amendment lawyer who protects journalists; my dad was a journalist who worked for Walter Cronkite, once dubbed ‘the most trusted man in America.’  I was disgusted and horrified by Trump’s designation of journalists as ‘enemies of the people,’ and how quickly that gained traction among his followers.  So, with FALLOUT, I documented a story in which an American journalist revealed one of the deadliest cover-ups ever perpetrated, one that ostensibly affected every human on the planet: the true effects of the atom bomb. I hope that the book has helped remind people of how necessary journalism is in protecting the common good.” Amen to that. Not only do I feel lucky to have women like Lesley who read TFI, I am even more thrilled she agreed to kick off Winter Notes From Home.

What are your newest favorite winter purchases? A new slate of game cartridges for our ancient Nintendo NES (including Dr. Mario, the perfect pandemic video game); a long, stiff, patterned duster-robe from Tucker; and a rose-quartz face roller from GOOP.  Last year at this time, I was in the field doing final reporting for a book on nuclear fallout.  A year later, I work exclusively from home and stress-roll my damn face while doing phone interviews.

Something already in your closet you are pulling out now: A big, comfy, striped La Ligne sweater: navy blue with colored stripes.  I think it’s the OG sweater they put out.

Fave winter food/or recipe: Ina Garten’s whole roasted chickens.  I make two at a time and serve them with roasted vegetables and wild rice.  They smell like heaven when they’re in the oven.

Fave winter sound: We live in the Los Feliz hills, and around every December, a mated pair of great horned owls returns to our neighborhood.  We listen for them every night.  The female – whom we’ve named Ophelia – has a distinct hoot from the male, Orville.  And the local mourning doves sing more in the winter than the summer also.

Winter weekend activity: Usually, it involves going home to New York and setting up shop in Bemelmans Bar for hours on end. Growing up in that part of the world, it was sledding and hot chocolate. During this very odd winter, as my family and I remain locked down in L.A., it’s been all about cooking. Over the past ten months, I’ve made new recipes from many parts of the world. It’s our way of traveling while limited to the confines of our home.

Latest read: The Queen’s Gambit by Walter Tevis.  The series was surprisingly allegiant to the book, which was just as gripping and wonderfully written. Also, I just finished Atomic Doctors by James Nolan, which, like my book Fallout, documents how much the U.S. government covered up about its nuclear weapons in the 1940s and beyond.

Online rabbit hole: Oh, God – Twitter.  I allowed myself a brief respite over the holidays, but now it’s the black hole that threatens to devour all of my time and my morale again.

New Insta discovery: I have a low-grade home décor obsession and follow quite a few interior design accounts.  They’re escapist counterpoints to all of the news and nuclear landscape stories I consume.  Two great décor accounts that I’ve just started following: @ateliervime  and @chezcosi.

Daily ritual you’ve abandoned: Gossiping with other parents in the parking lot of my kid’s school.  My daughter hasn’t been able to attend school in person since last March.

Favorite hour of the day: 6:00 AM.  I get up before everyone in my family, watch the sun rise over the San Gabriel Mountains, drink about 87 cups of coffee, read the papers and scroll Twitter.  It’s the only time of day that I have to myself right now, since we’re all working and schooling at home.  Even if I’m up late the night before, I’ll still make myself get up early.  That time alone feels essential.

Where are you donating your money/time? During the election, I became involved with a small but effective organization called RISE, which worked to galvanize and register student voters in swing states.  It successfully got tens of thousands of young voters registered and to the polls, and made a difference in the outcome of both the presidential race and state elections.  I also support the Committee to Protect Journalists, Fair Fight, and the Bulletin of the Atomic Scientists.

What do you miss most? Restaurants and movie theaters.  I’m desperate for a gimlet and steak at Musso & Frank, and would give anything to be able to see the new Wes Anderson movie in a theater.  Also, I used to take my daughter to see Saturday morning cartoons at the New Beverly Cinema, Quentin Tarantino’s old guard movie theater in West Hollywood. We would pick up bagels from the Yeastie Boys bagel truck and eat them while watching Looney Tunes on the big screen.  It was heaven.

If you’ve had a chance to travel recently where did you go? If not, what will be your first trip? My last trip: New York City in February, 2020.  A week after I returned to L.A., that city was in lockdown, and shortly afterward we were also in lockdown here.  Before that, my last major trip was to Japan, as I finished researching FALLOUT.  When my book came out this past August, I was supposed to do a big book tour.  Instead, I did all of my media appearances and events from my home office – occasionally while wearing a blazer over my nightgown, if the interview was really early.  Hopefully I’ll be able to go to Japan when FALLOUT is released there later in 2021 or 2022.

What do you hope the new normal brings? I hope that people remain as politically engaged as they were in 2020.  Practically everyone I knew donated their time and money to campaigns, political organizations, and social justice causes.   Many have realized how fragile our democracy is, and how rampant injustice is – and that each of us plays a crucial role in creating change.  I also hope that people continue to value and support journalism.  I feel that there has been a renewed appreciation for how desperately important investigative reporting is in serving the common good and holding the powerful to account.  But our press has been under unprecedented assault for years now, and needs our dedicated support more than ever.