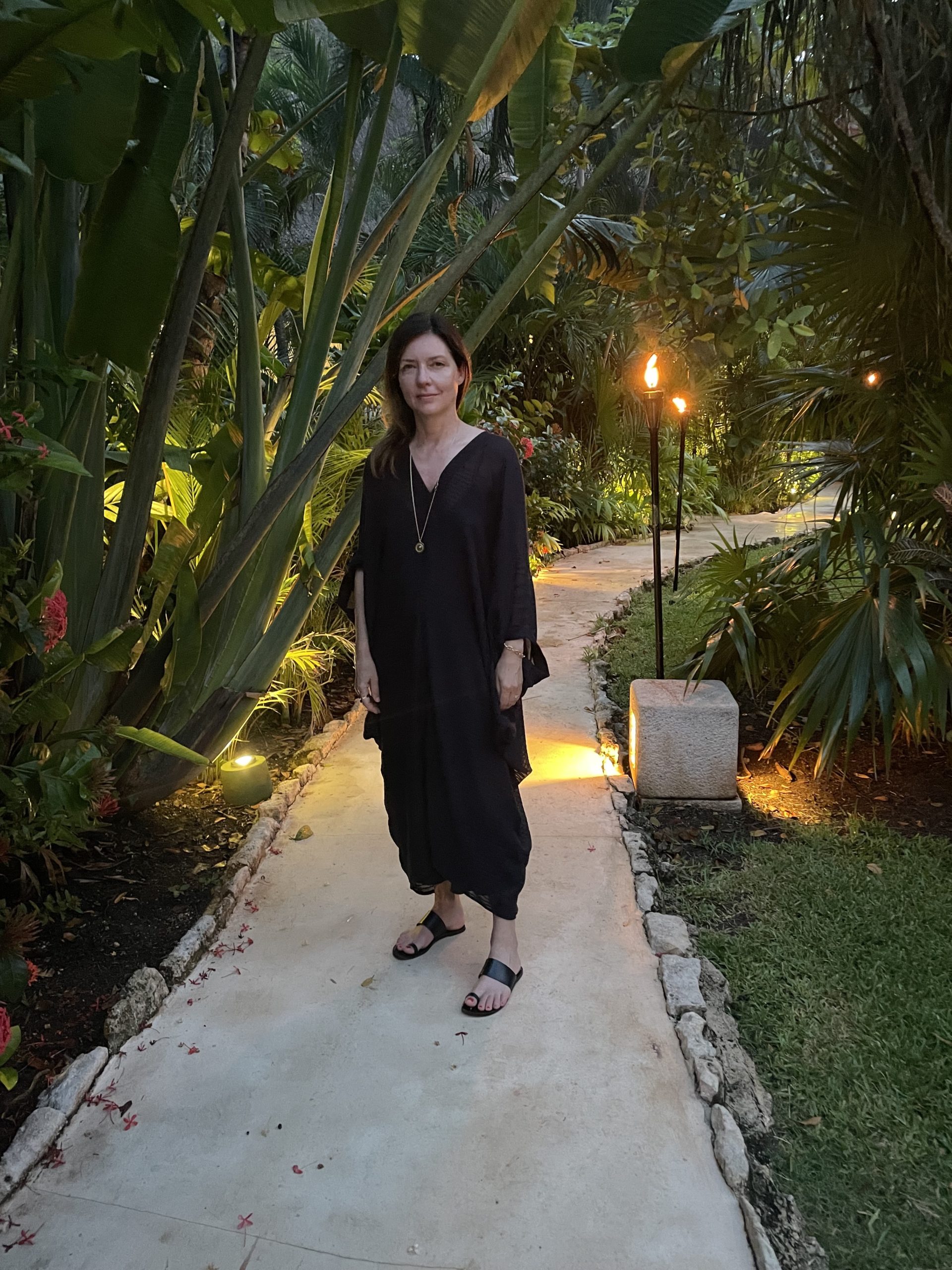 Last week, my husband and I went on our first do-nothing-but-sit-by-the-beach vacation we have had in over two years. It was heaven. First, we spent four nights at Hotel Esencia, north of Tulum. Some of the best hotel experiences I’ve had have been in Mexico (the other at La Maroma, now a Belmond hotel which is currently under extensive renovation), the attention to detail rivals any European destination, the food is fantastic and the people are warm and welcoming.

It’s relatively quiet in June–not high season and not high-season prices, which if you are looking for a scene, could be off-putting, but I could care less, I wanted escape and we got it. Hotel Esencia is modernist with Capri vibes–our room was one my all-time favorites.

There is a main house, which I would happily move into, two pools and three restaurants–two of them off the beach/pool area. The spa, which I wish they had taken me on a tour of when we arrived and I didn’t see until later looked incredible. I plan to go back and take advantage (you always have to leave something for another time, right?!) I did take two morning yoga classes in the tree house (they do have a gym but this is the one vacation I decided to leave my running shoes at home), which I enjoyed.

One day we rented a car and went to Tulum for lunch at Posada Margerita, mostly because we had been there ten years ago and it felt sentimental. (We considered trying to walk in for dinner at Hartwood, which is apparently excellent but honestly we were so happy at the hotel, it seemed like a bother.) The food at Posada, is Italian and still excellent. Overall I was not impressed with Tulum. Perhaps if you’re staying in one of the nice hotels which you can’t really access, it’s worth it, but the shopping and walking experience is meh. (Plus I have been to the Tulum Mayan ruins twice so that wasn’t on our to see list.)

Post Esencia, we took a two hour taxi ride to Coqui Coqui at Coba. Coqui Coqui is owned by an incredibly chic husband and wife team who have several other hotels in Mexico (and a new one/residence in Bora Bora), along with a line of perfumes and travel/home accessories. The Coba hotel which they built, is meant to resemble a Mayan ruin (of which there are amazing ones a stones throw from the hotel), it is rustic and very cool. We had one of the two Palapa suites which were accessed by an outdoor staircase three floors up.

The first afternoon we went to the Cenote San Juan which is a 15 minute taxi ride from the hotel. The Yucatan peninsula is mostly limestone, and a cenote is an underground sinkhole or cave that is connected by underground rivers. There are thousands of them. Some can only be reached by snorkeling or diving underground through tunnels (not happening for me), others by descending a staircase to a platform, from which you can jump into the water and swim around. It’s a unique experience, but not great if you’re claustrophobic.

The next morning, we walked to the Mayan ruins which are less than a mile from the hotel, rented bikes (for $3) and toured around. Do not miss the ruins if you go….some of the buildings date back to 700 A.D. and there are many of them. Definitely rent a bike because it’s extensive walking and the farthest ruins are the largest. Also bring bug spray. It’s the jungle.

The Coqui Coqui resort itself–set on a lagoon, is very small (5 rooms), has some of the most excellent Mexican food I’ve ever had, the nicest staff and the chicest boutique, where I bought two summer dresses and some suede pouches with their palm tree logo (which I love). When you arrive, they gift you small perfumes and shampoo/conditioner and body soap which are incredible. Coqui Coqui is also significantly less expensive than Esencia. My two notes if you go: Two nights are enough, and also bring $$$$. There is no ATM in Coba (which is tiny) and they only take cash in Coba. The closest ATM is in Tulum which is 45 minutes away. We had enough to go to the cenote and ruins, but might have eaten at a local restaurant (our driver said Cocodrillo is the best) if we had brought more. Another thought is if you do beach time somewhere else and are ready for more adventure, you might want to try one of the Coqui hotels in Merida or Vallodolid, two towns I now want to visit.

So, onto packing. I managed to go with a carry-on for six nights. Frankly, I impressed myself, but also, I still didn’t wear everything I brought.

Next time, I will bring fewer shoes and less pairs of shorts; the Su Paris caftan and silk pajama set got the most use. I can’t wait to go back!