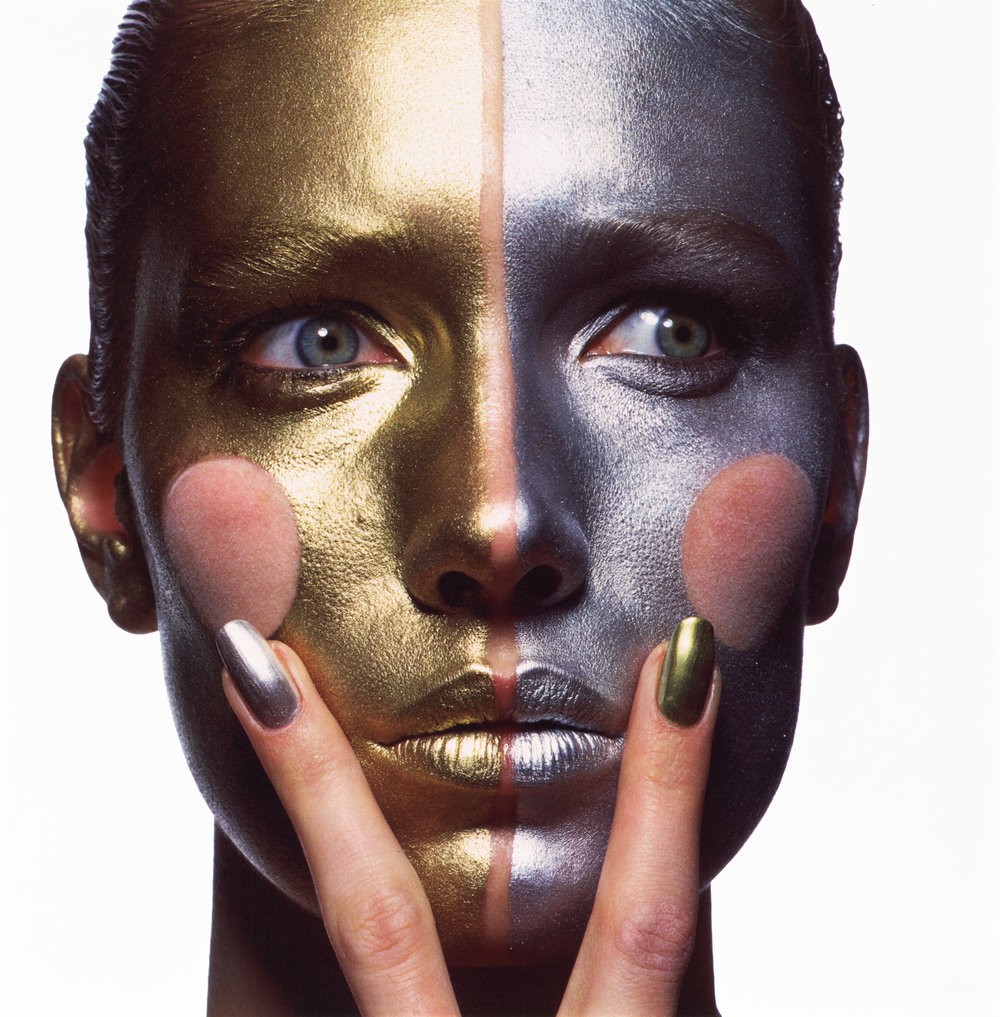 Not a fan of frozen Botox face but still want subtle help? Or maybe you’re after the holy grail—a dewy, pore-less healthy glow. Whichever, or both, it seems that derma rolling might be the modern answer to your beauty routine. Cayli Cavaco Reck, founder of Knockout Beauty, couldn’t be a bigger fan and her growing list of converts is proof. What is derma rolling? It’s the use of micro needles on the skin to help stimulate collagen production and allow products to be infused more effectively.

I like the idea that you can use a derma roller in an 100% organic manner, as a vehicle for serums, or you can get a bit more science-focused and try a topical neuro-toxin (Botox’s milder cousin, and perhaps better for you since it’s not absorbed straight into your body) to help combat frown lines and crows feet. (Note: Derma rolling products are much cheaper than Botox, but are still an investment.) Cayli finds that women who use fillers and topical neuro-toxins together, as opposed to Botox, often have better, more natural results. Fillers? No thank you. But apparently my thinking is old-fashioned, because modern fillers are made of hyaluronic acid, something our bodies produce naturally. So first I’m going to try derma-rolling—you can read Cayli’s tips and how-to’s below. Then, I also want at least learn the lowdown on fillers from my dermatologist Dr. Gervaise Gerstner…stay tuned for more.

What is derma rolling? Derma rolling is in its most simple form is a roller with fine millimeter needles that create a slight injury to the skin. When I say millimeters, they range generally between .1 and .25 on the face for a consumer. I personally find the sweet spot is .2. I think .1 feels too small and .25 feels almost too aggressive. That’s the length of the needle, not the width. The needle length is important in that it allows for the product to penetrate more deeply. The smaller the size of the molecule of the product that you use after you roll, the further it can penetrate the skin. If you want to plump your skin, you want to use a low molecular volume hyaluronic acid or something of that nature.

What do you put that on after you roll? You want to use something that encourages the production of collagen or elastin, something like Avance from Environ. Environ is one of the pioneers of the roller, which is why it’s the only roller I sell. Avance is all about helping the body produce more collagen and elastin. You can use it anywhere. You can put it on your knees if you so have the desire. What’s great about Avance is it’s a peptide that stimulates that production. I think the reason people like dermarolling is that it feels nice, but it also brings a vitality to the skin. This is what’s different about rolling. There’s a thousand types of peels and lasers, and a lot of times the skin has to work really hard to recover from those things, so the skin can look tired afterward. But when we roll, we’re stimulating and encouraging that vitality in the skin. The skin looks glowy and healthy. It’s gives you that lit-from-within look.

Then there are topical neuro-toxins, either Focus Frown from Environ, or Myo-Fix from Meder, or even a bee venom cream which acts as a topical neuro-toxin. All those things work like Botox, except they’re not penetrating deeply enough to actually get into your bloodstream. 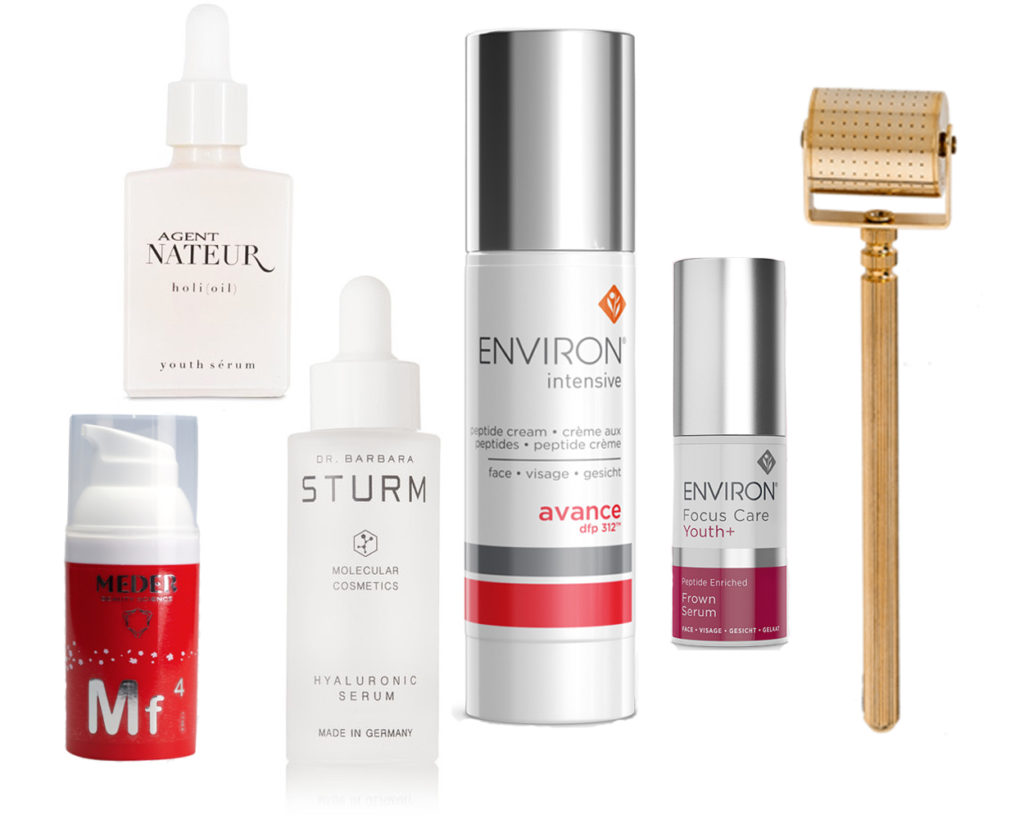 Can you go on and off and switch between using a collagen and a neurotoxin? Indeed. I also love a hyaluronic acid. Dr. Stern has a beautiful one. I love the Meder Hydrofill. If you love a face oil, the Agent Nateur face oil has a beautiful, all-organic formula. It also has hyaluronic in it, which is amazing.

When do you do it?  At night after you cleanse and tone. If you look on the box, the directions say to use it once a week. If you want to prolong your Botox or filler, which it helps, once a week is enough. If you want that glow and plumpness, ideally you need to do it a minimum of three times a week. My recommendation is that it’s like anything—the more you do it, the better it will be. But then I did my neck too much last spring. It became almost too tight.

Your neck became too tight? That’s an oxymoron for many of us.

I know. The great thing is, you can just back off of it when you think, ‘Oh, that’s a little too tight.’ The three places where people really have the earlier signs of degeneration of the skin are the eyes, mouth, and neck. The problem is that once they start to go, you’re chasing it forever. There’s really not a bunch you can do to stave it off, except by rolling.

What else are you going to do? Do Botox from the time you’re 27 until you’re 100? Think about all the neuro-toxins you’re introducing into your body four times a year for that many years. For 75 years. 73 years. When Botox was introduced to the world, we were all at the beginning of aging. I always wonder when I look back, will we be ‘the Botox generation’? Is that how we’re going to be seen?

Plus nobody wants to stop looking like themselves. It’s the whole conversation now about anti-aging. It’s not about anti-aging. Everyone wants to grow older and wiser, and more interesting. Too much intervention, you stop looking like yourself, so it defeats the purpose. When I talk to women about beauty in general, I like to talk about the fact that it’s not about vanity, that your face does mean something to somebody. As a mother, I think about it. My daughter’s face–all the perfections and imperfections are so special to me, because it’s her. Those things, it’s important to us as human beings, because it gives us a sense of security and safety.

Who are good candidates for rolling? Who should not use it? Acneic people should not be using a roller anywhere you have anything that can spread it. If you’re acneic, you want to be cautious of rolling in that area. Having said that, if you’re acneic and you can get it under control and you can roll over that area, you are less likely to be acneic, because the pores get smaller and less sebum is passing through. It tends to actually control acne once you’ve got it into a good place. It’s incredible for post-inflammatory indentations, where you’ve had a blemish or something that has actually pitted the skin, because it does resurface the skin. No one with a sunburn, no one with compromised skin in that way should be using it. I think pretty much everyone else in the population should be using.

Men are excellent candidates for a roller. A lot of men don’t want to do Botox, but they shave their face so they’re already using a tool and rolling it around their face. It’s a similar activity. It takes three minutes. It actually really does help, even if they’re not using products afterwards.

If you were going to do it three times a week, what products would you personally use? I like to use a hyaluronic. I just like the way it looks. Then I also like the Myo-Fix particularly in my crow’s feet. I’m a big fan of using Myo-Fix or Focus Frown, which are topical neuro-toxins, on the crows and what I call the elevens—those vertical lines you get between your eyes above your nose. I don’t raise my brow very much but or people that do, it’s something to use it on your brow too. Then I like hyaluronic around the mouth, in the nasolabial folds, and also in the forehead. I think the forehead needs a double punch.

Can you put two products on at the same time?  You can. You just need to use one with the lower molecular volume first. So you would put Hydrofill first and then Myo-Fix second. That’s, by the way, the rule of layering products, always lightest to heaviest.