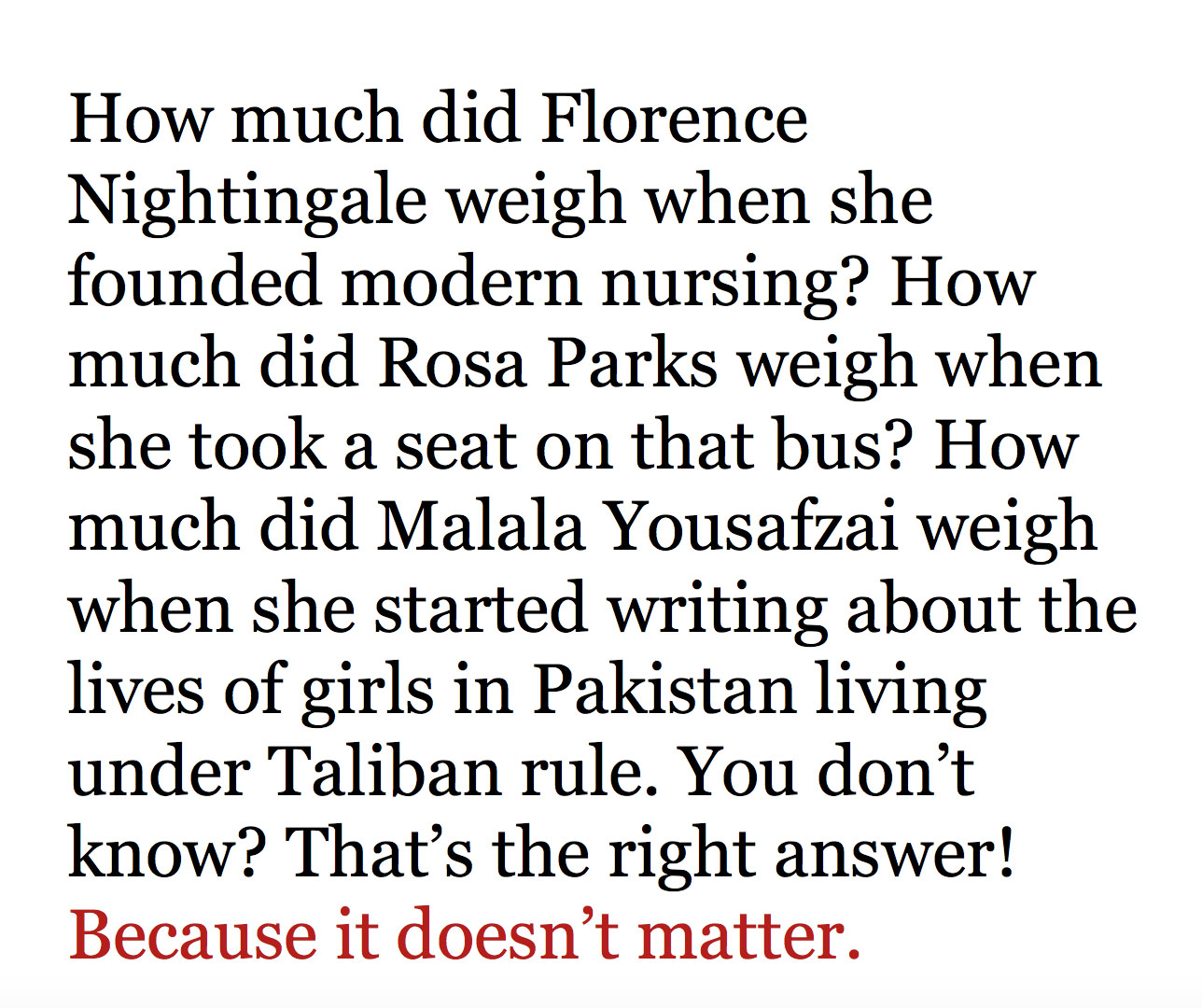 I had an interesting conversation with a couple of women the other day and the issue of weighing (on scales) came up. One woman was trying to lose some weight and kept a scale with her “magic” number next to her bed. The other woman didn’t say how often or if she weighed herself, but she was surprised when I mentioned I don’t really ever weigh myself. Then I saw this post on Instagram yesterday and decided I would weigh in on weight.

I rarely weigh myself for several reasons 1) I am not an insane double-class-a-day-taking exercise buff but I do exercise often–4 to 5 times a week, regularly. This last vacation was the first time I haven’t gone running a couple of times a week probably since my back surgery 10 years ago. I never miss. This is the kind of discipline you get from studying classical dance seriously for years on end. 2) Another reason I don’t weigh myself is my weight doesn’t fluctuate that much. Sure I get seriously bloated during my cycle but because I exercise often I judge my weight by how my clothes fit.

I read some quotes yesterday from Beyonce’s interview in the September issue of Vogue in which she is honest about how she has come to except and love her post-twin curvier self, even her “mommy pouch”. I saw her in concert last weekend and her curvier body seriously kicked ass. Her confidence level is off the charts and feels empowering.

Sure, I get it, she’s Beyonce. But all women’s bodies go through states of flux and what your scale says should have no bearing on how you live your life and what you can accomplish. Numbers don’t lie, but numbers on a scale are also just that–a numeric representation of your mass plus gravity. What happens if you ignored those numbers and worked on something more important? Say being healthy. One of the main reasons I exercise is to stave off heart and other diseases, and very important because I’m a woman, bone loss. It isn’t a guarantee that I won’t be affected by something at some point, but I’m going to try hard as hell to keep from ending up like my great aunt who broke her hip alone at home, was discovered a day later and never recovered, or my father who had a fatal aortic aneurysm at 59. Neither exercised. Bad health can keep you from accomplishing a lot. Being five or fifteen pounds overweight will not. Weight and health are tied together on some level, but just losing weight alone does not necessarily make you healthy. Plus weighing yourself can be a mental drag. How often does getting on a scale make you feel good? What happens if you spend that energy on improving your health? And what if we lead by example and teach our daughters to do the same?

« Fall Transition That Makes Sense
My Profile on The PR Net »