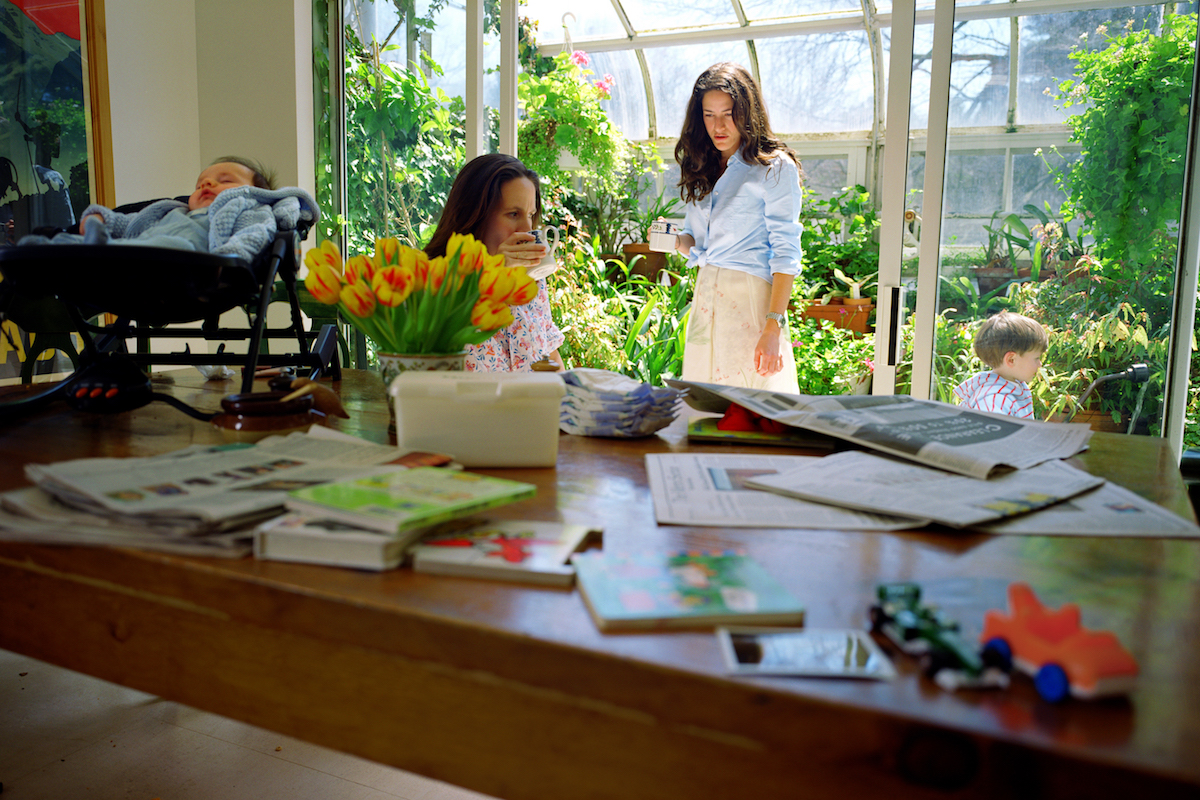 Instead of your typical Ode to Mother’s Day, this is a feature on an artist whose ongoing series (since 1997), The Stages of Motherhood, focuses on the perfectly imperfect lives of women from NYC to LA and beyond. Blair Clarke, who represents Gail’s work, introduced me to her and I am a fan. Motherhood is complex, often chaotic, and encompasses a endless list of yin/yang emotions. Gail deftly manages to incorporate much of this into her work (along with juggling her own family). She also teaches a class at Columbia University’s School of Medicine. Like motherhood, Gail has many layers. Meet the woman behind the lens.

Please introduce yourself to the TFI reader and tell us who you are and what you do: I am an artist. My art is about people and their personal spaces and how our personal space sets a stage for who we are.  I mostly say I’m a photographer, because it is the medium I use most, but I’m actually working on a play right now, too.

When did you know you wanted to become an artist? I grew up as a science nerd. I loved photography and made a camera for my first grade science fair. I grew up with a mom who loved photography and we always had a dark room in the house. I went to college and assumed I’d be a physician. I did all the pre-med classes. I was working at a pediatric psychiatric hospital after college getting ready to take the MCAT and my job was to film families of patients in the psychiatric hospital. I loved the filming. I realized there was a way to combine my two interests if I became a artist.

I didn’t take the MCAT and I decided to apply to one graduate school and if I got in, I decided I’d become an artist instead of a doctor. And I did. Now I teach at a medical school. So I have both. 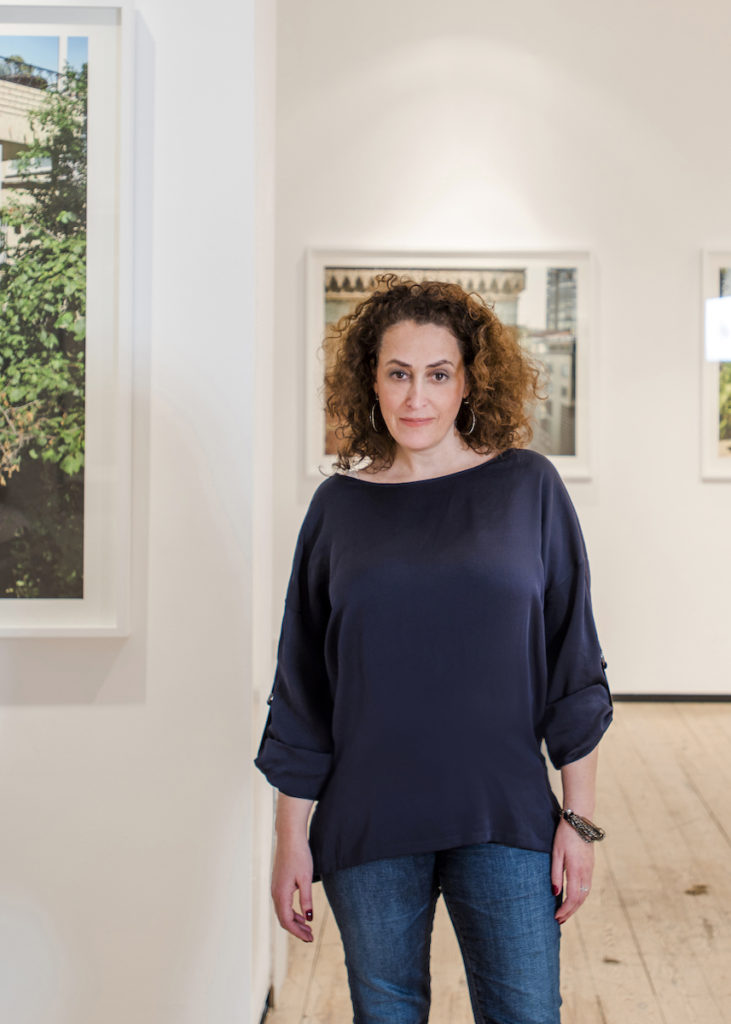 What do you teach?  I teach photography and visual literacy in the narrative medicine program at Columbia University Medical School.

What does that entail? So much of what physicians use to communicate … and actually what anybody uses to communicate is visual information. But we’re not taught to read and write visually. My class is just how do you take something unfamiliar and observe it? And how do you communicate with photography to communicate what you’re seeing better?  It’s part of the narrative medicine program at Columbia.

What was the easiest part about becoming an artist? The easiest part is it’s fun. I never quite realized it was something that I could consider as a job because it is so much fun to do all the time. Which is also the hardest because now my hobby is my job. And my job is my joy. Sometimes I never stop and that’s probably the hardest thing–I’m always, always on and thinking about it.

I wanted to talk about the Stage of Motherhood Series. What inspired the series? It started when I moved to Las Angeles, right out of graduate school. I was in my 20s and I was really interested in how women in LA seemed totally perfect. They had everything together. I was kind of interested in sort of peeling back the layers and seeing if there were any cracks in that perfection. 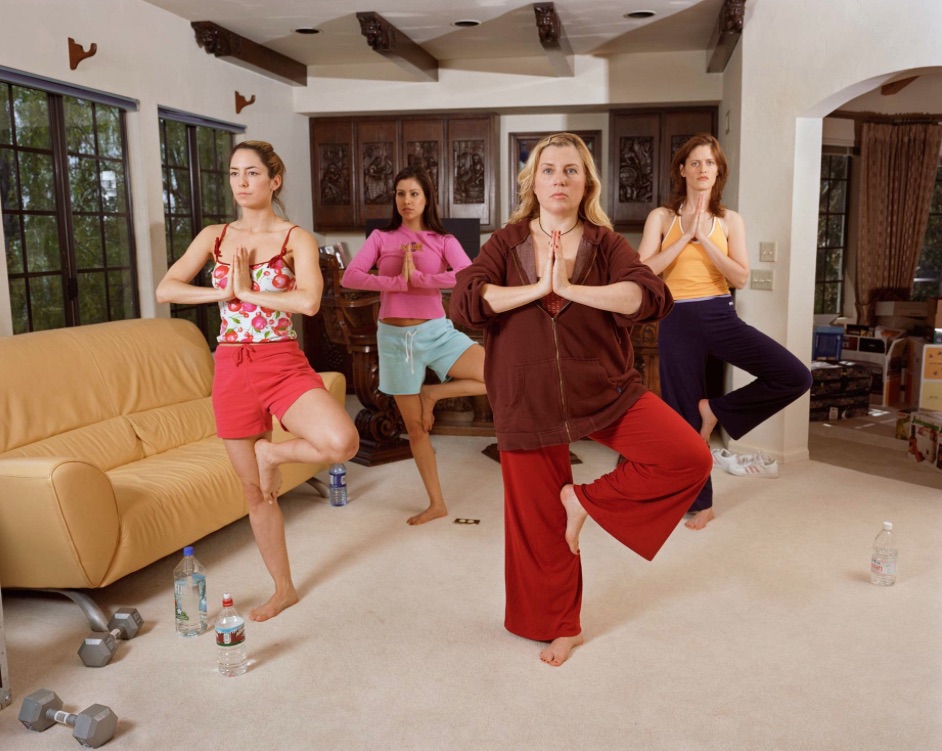 As I was photographing the women in my 20s, it was my peer group. So they all ended up turning 30. So the first series of work was called About 30. It was women the year they turned 30 in that first show.

Then, all the women started to have kids. So I started to photograph the same women from Las Angeles and then I moved the series to New York and Mexico City. All friends of friends of friends who kind of had everything. They had great careers. They were beautiful and had perfect lives. I never felt that pulled together. So I was curious to look at other people and try to figure out how they did it.

The idea of motherhood has so many positive and negative connotations. What were you looking to convey in your photos?  I have to admit, in retrospect, I know that my pictures are complicated. There’s maybe some ways to read it, some negative. But I was actually looking at the positive, the perfection and the beauty.

I started the series before I had kids. I don’t think I had any negative connotations about motherhood. To me, it was wonderful. Everything was great. That was sort of where I was coming from when I did it. I’ve been doing this work now since 1997 and I still photograph it so obviously, my understanding of the topic is much more complicated than it used to be. 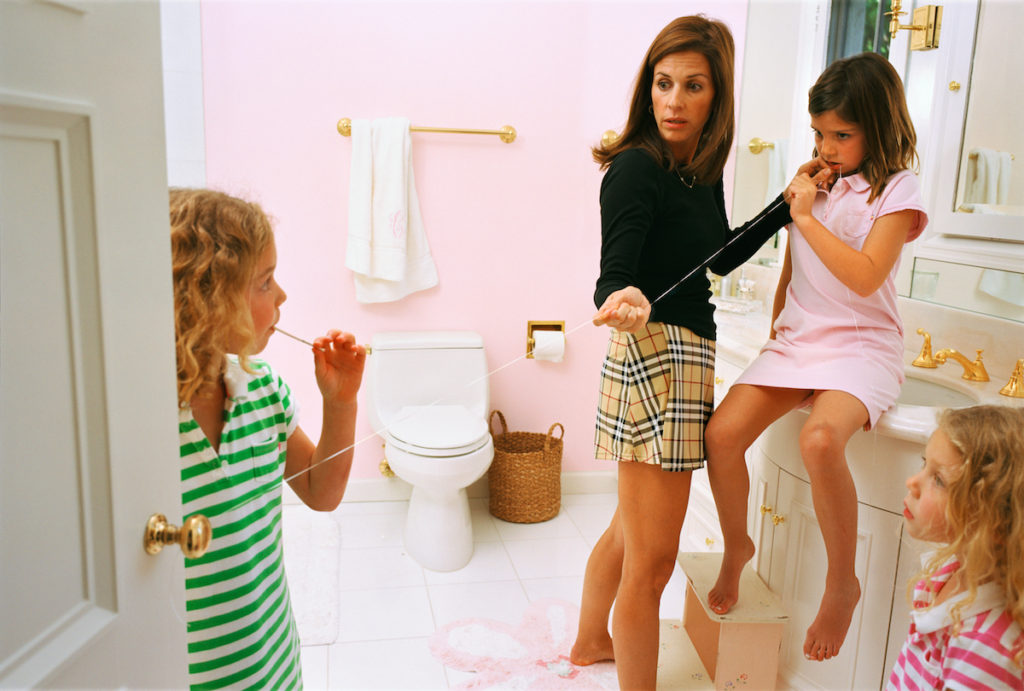 Has anything surprised you about doing this series? From a technical point of view, so much has changed since I started the series. I started the series before digital photography. Before, the process was so labor intensive and I had to determine everything in advance. I had to light it perfectly and figure out every element which was an incredible way to learn to work.

Digital photography has changed it a lot in that now I can adjust the lighting or adjust the color. The things you would normally have to do in the dark room later, I can do very easily. It’s made the work much more spontaneous.

But you asked if anything surprised me. To me, I think all these people are beautiful and wonderful. As a mother, I embrace all the chaos that I’m depicting. I think it’s really a true vision of motherhood. I’ve been surprised sometimes that people think that maybe I’m criticizing the people but I don’t see it at all. I definitely see I am part of this tribe of women. I admire them with the faults.

What do you hope people come away when they see the photographs? I find the people in my pictures amazing. They really are doing it all. They are successful, engaged in their lives professionally, and engaged with their children. That sort of sense of being able to create this world where you can have it all, I love.

Those moments where I show women as disconnected, I see it as taking a moment for ourselves and meditative moments. I love to acknowledge that we don’t have to be perfect all the time to be really good mothers.

In general, what motivates you? I like seeing into other people’s lives. It’s such a privilege to be invited into people’s homes. I think a lot of photographers, when they photograph people, it’s staged to be perfect and that Kodak moment. That people are letting me in their homes to see the real chaos in their real lives—that’s so much fun to me.

I travel a lot for my work. I love the fact that I can go to all these different places in the world and be invited into people’s homes. I like to see places as a local. One of your attributes that you think helps you succeed: I am incredibly curious about people. A lot of people say I’m such an American because I’m nosy. I’ll ask anything. I’m very open in a very New York, American way. I think I have chutzpah that I think has probably helped me get this work done.

Three words that describe you: Mom—that’s probably the most important. Curious. And I think I’m pretty friendly.

What’s next?  I am working on a project where I photograph from one neighbor’s window looking into a neighboring window in cities all over the world. That’s gonna be a series in 2018. Then, I’m going in closer and photographing portraits of people inside the windows.

Yes, but a friendly window watcher.

Life goals: To have happy and healthy kids.

Daily goals: To keep a lid on the chaos that is the life of a working mother.

Favorite motivational or inspirational reads: I don’t know if this counts, but I love the author Zadie Smith because she describes characters so quickly. You get a sense of who somebody is in a few words in a very photographic way. She’s a big inspiration for me.

Daily rituals: To have a cup of tea with my husband every morning before we get out of bed and deal with the day.

Hidden talents or hobbies:  I love to cook, but I don’t know if that’s a hidden talent or a hobby. That’s my favorite, relaxing thing to do.

Do you collect anything? No. I used to collect a lot of things. Once I moved to New York and started working from home and had kids in my apartment, I now do the opposite of collecting. I try to get rid of anything I can and try to have as little as possible. 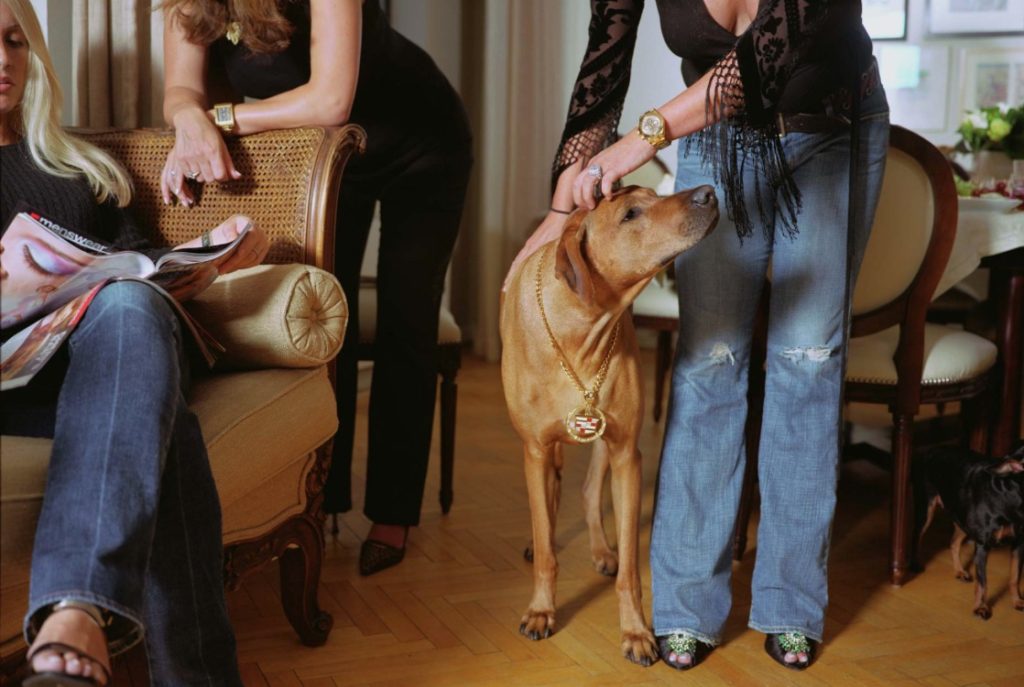 Biggest splurge you don’t regret: Once I bartered with the jeweler Lorenz Baumer for some diamond jewelry, the first jewelry I ever got for myself.

Favorite small indulgence: Every Tuesday my son and I walk to See’s Candy and get a box of chocolates together. We pick out each piece. It opened relatively recently. My son actually cut the ribbon on it. We were the first customers and we are one of their most regular customers.

Album currently on repeat: I have fallen asleep since I was like 18 or 19 years old to Paul Simon’s Rhythm of the Saints. I still fall asleep to that.

Scent that brings back memories: Lilacs, which are in season right now.

Lucky charm: It’s similar to the splurge—a diamond ring, a heartbeat ring, I bought which Lorenz Baumer picked out for me without knowing me, right before my son had heart surgery. I wore the ring the day he had surgery and he’s fine now. I feel like that ring is definitely my lucky charm.

Favorite hour of the day: Dinner time with my kids. It’s the only time we’re all together and sit down for an hour. 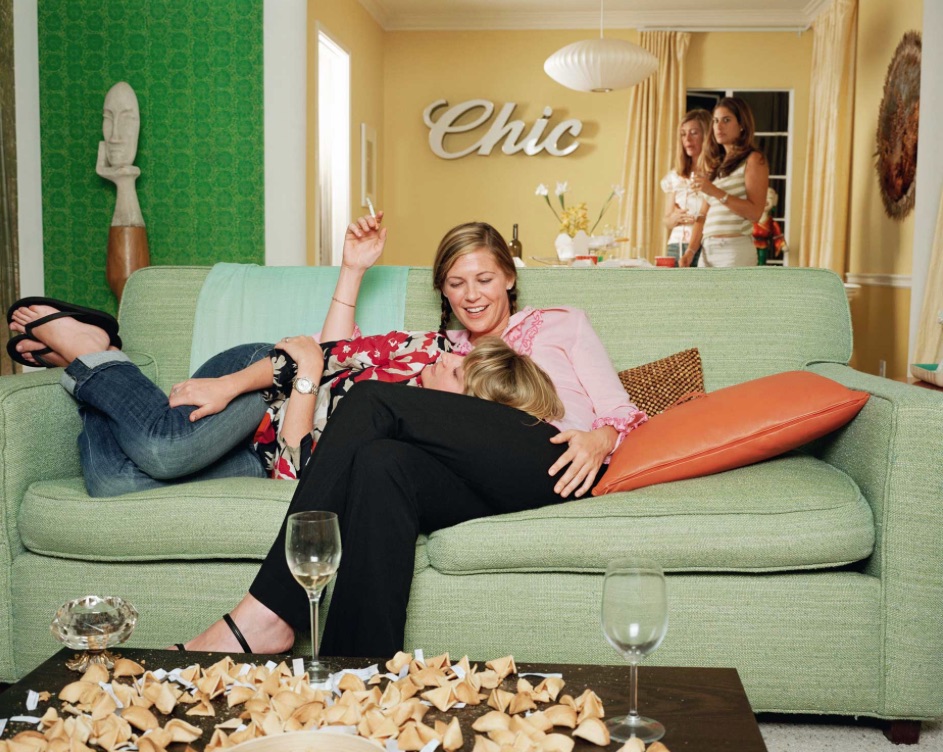