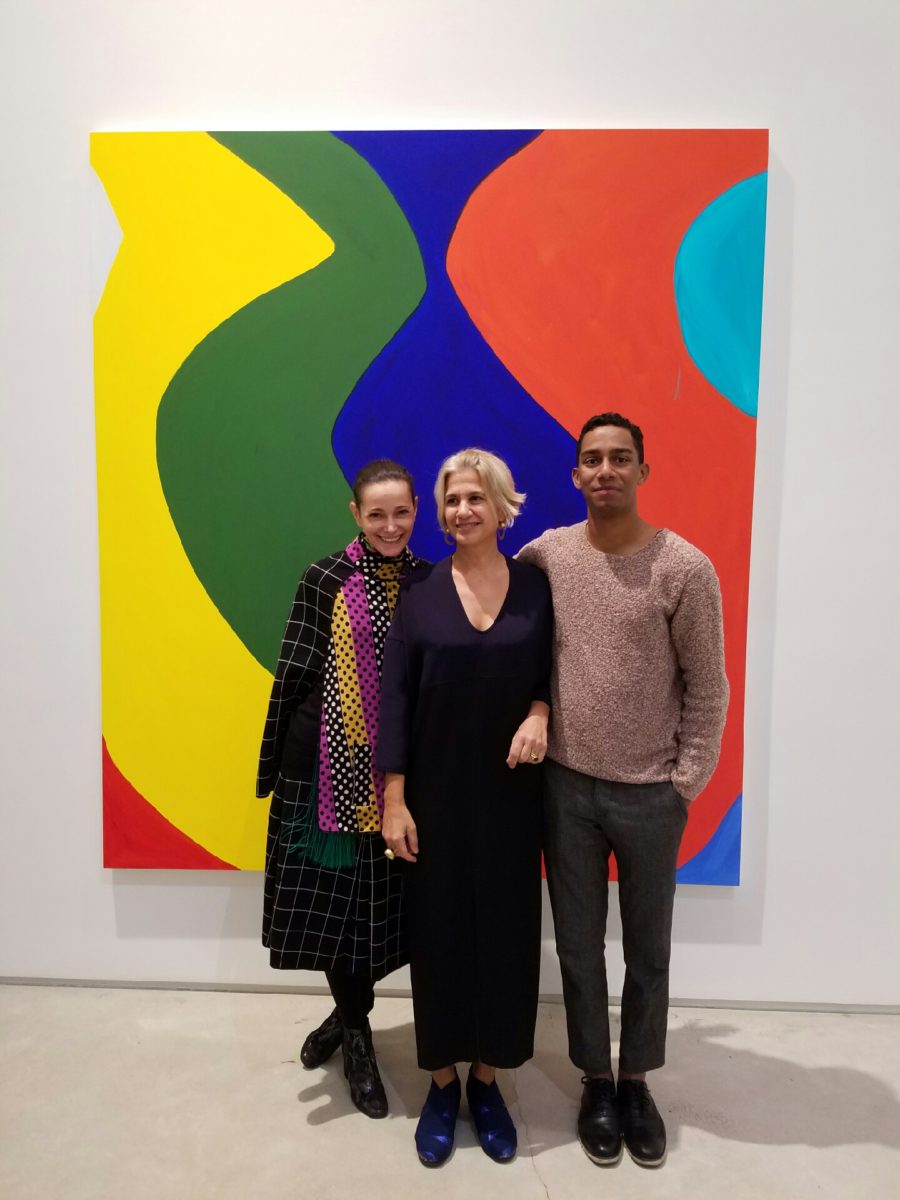 If you follow the site, you will know that recently I wrote about artist Marina Adams’ newest exhibition, Soft Power at Salon 94 Bowery, which is currently on view through February 22nd. I was really moved by her work that I saw online, and thought why not request an interview? Lucky for me, she not only agreed, I had the privilege of meeting her at the exhibit. I have a deep reverence for artists. Having trained quite seriously as a classical dancer in high school, I have an idea of the dedication, discipline and emotional guts it takes to pursue a life in the arts. Art is also very personal; Marina’s vibrant, kinetic paintings resonate with me. Here, Marina (pictured above center with Jeanne Greenberg Rohatyn, owner of Salon 94, and Marina’s son, William Whitney) discusses her latest work, what color means to her, and why art might be more important than ever.

When did you start working on these paintings? What inspired you? They’re all from 2016.

I’ve found that I always work towards clarity. When we see clearly, we tend to gain an understanding. The paintings are not literally interjected with a story or a narrative because as an abstract painter, you’re not giving that. Working abstractly allows me to go somewhere else, and I like mining that space. It’s a space for having thoughts that can open you up to new experiences.

I think our digital culture, our technological culture actually fills us up so much that it doesn’t leave a lot of room for our own thoughts. And I find that to be very dangerous. So in a sense, I’m working against that. Artists often are the ones swimming upstream.

And what’s interesting now, is that all of a sudden, we all find ourselves, and I think even if you voted for Trump, you’re in the river with us swimming upstream, and that we really are all connected. 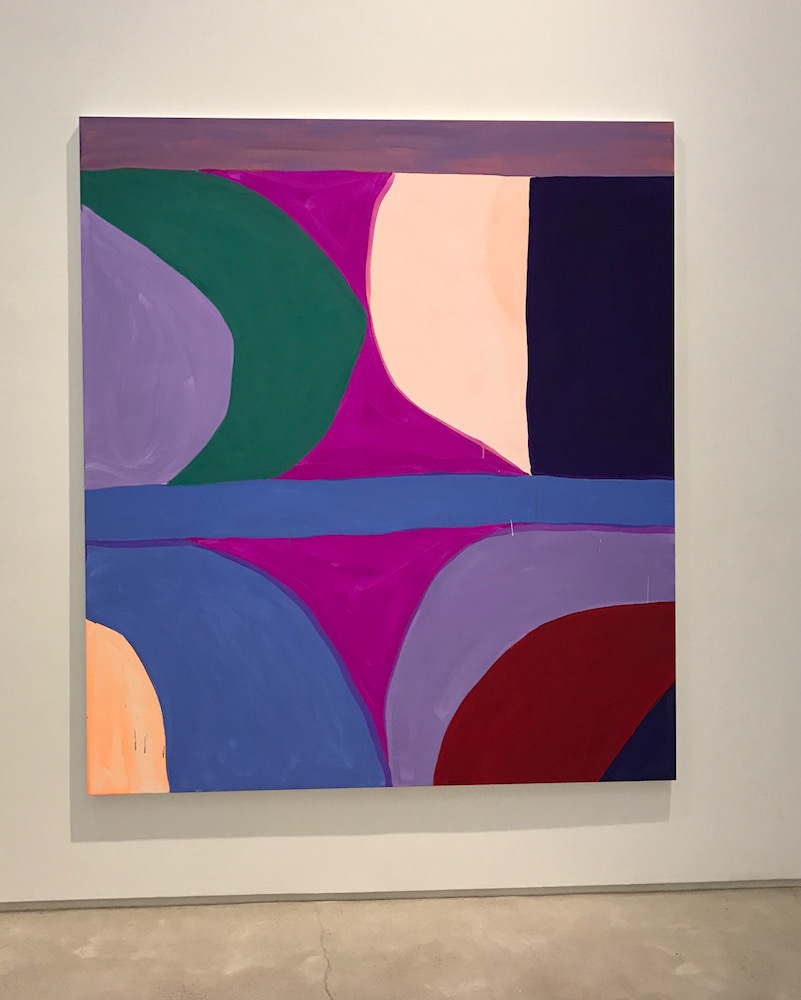 And we all have to find a way to turn this around. And we have to, because part of their agenda is to destroy our habitats. And these habitats have already been so destroyed. But they’re going to finish us off. And that’s frightening, but it’s true, and we have to recognize that. And I think that creates an urgency that we’re witnessing in this enormous upheaval, and was what we witnessed on Saturday [at the Women’s March]. People worldwide stood up and said, “No. We’re not going that way. We’re going this way.”

I watched Aziz Ansari on SNL and he said, “A whole gender came out and marched.” It’s kind of amazing. I think it’s time for another way. The way women do things is ver different than the way men do things. It’s yin and yang, it’s not to say that one is bad and one is good. We can’t be simplistic. However, the whole reason the yin and yang is equally divided is that we need both, we need equal power. And that’s what we’re talking about.

I try to bring clarity into the work so that we can look at a color and name it, even if it’s un-nameable. For instance, at the top of the painting, Second Sun, there’s an orange, and then I painted a thin purple over it. What color is that? I don’t know, but we can see it. And so this kind of transparency, this kind of clarity, is very important to me. And then we get to the edges. The edges are very much felt-out in the moment, in the process of painting. Those are the decisions that get made while I’m working. So as much as I will give myself a structure beforehand, with drawing, the painting itself comes in the moment. I never know what it’s going to be. I never know where I’m going to come out. And usually if I have an idea, I never get it. I always get something else. 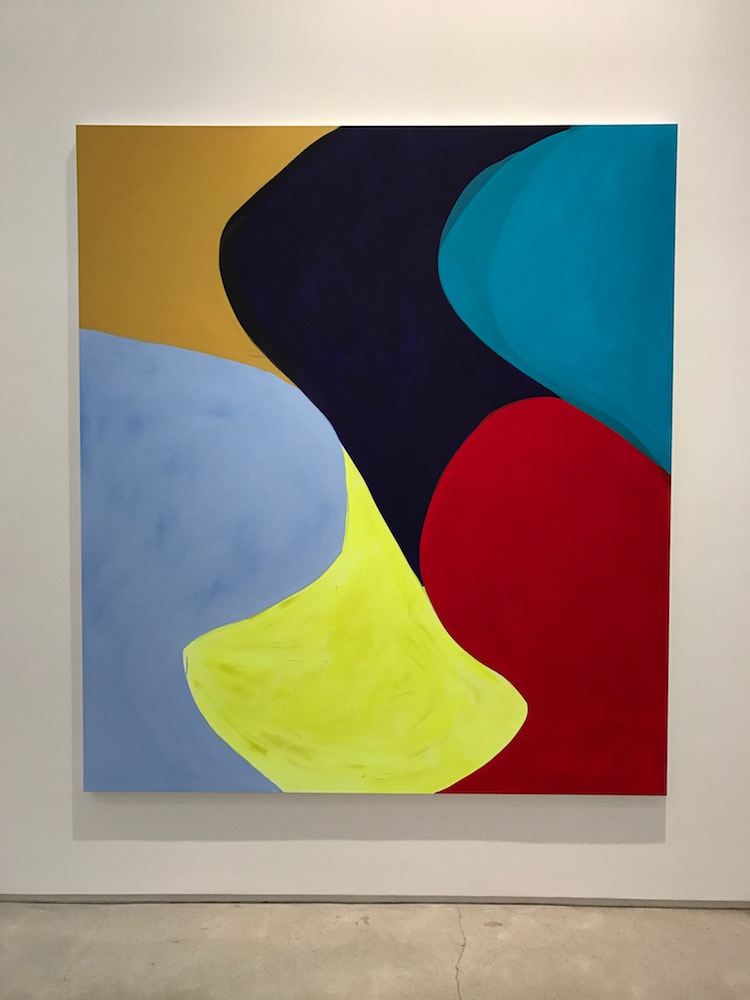 Really?  Always. And that’s really exciting. I do a lot of small gouaches, so they feed the work–sometimes more directly than others. But it doesn’t matter, because when you change size you change scale and everything changes, and you’ve got to rise to the moment. The thing about painting is, it’s always about rising to the moment. And I think that again, leads me back to the moment we’re in. We saw an enormous number of people rising to the moment. People going out of their way, stopping what they were doing, and saying, “I need to show up.” And we all showed up. And that’s enormous. That kind of energy is powerful and that’s our power.

How do you know when a painting is done? It tells me.

Your paintings have a lot of energy. Where does that come from?  I think it comes from the tension of the forms and the color.

Can you talk about your use of color? What draws you to colors? We all have our favorite colors. But the thing about color is that if it doesn’t have power, it becomes decoration. Think about Matisse, who’s such a great colorist — his color has power. When I put down a color, it has to stand on its own. And then it also has to stand together with all the other colors. And it’s kind of like being an individual in a crowd. We all have our own individuality, we’re all people, but someone said something like only one percent of us, of our being, is different. And it’s interesting how we cling to that. But 99 percent is all the same–we all have two eyes, a nose, a mouth….

So getting back to the color. When you look at a yellow, I want it to be yellow, I want you to look at it, and I want its presence to be yellow. And then when you move to a blue, that blue is blue. The colors have to be able to not only sing together, but also exist as individual voices. Everything has to flow, everything has to work alone and together.  Also with color, I try to make choices that are unexpected.

My good friend, the poet Norma Cole used the word ‘startling’ when speaking about my color. I loved that, because this is not decoration. I want people to wake up, and I want them to really think about something larger than themselves. 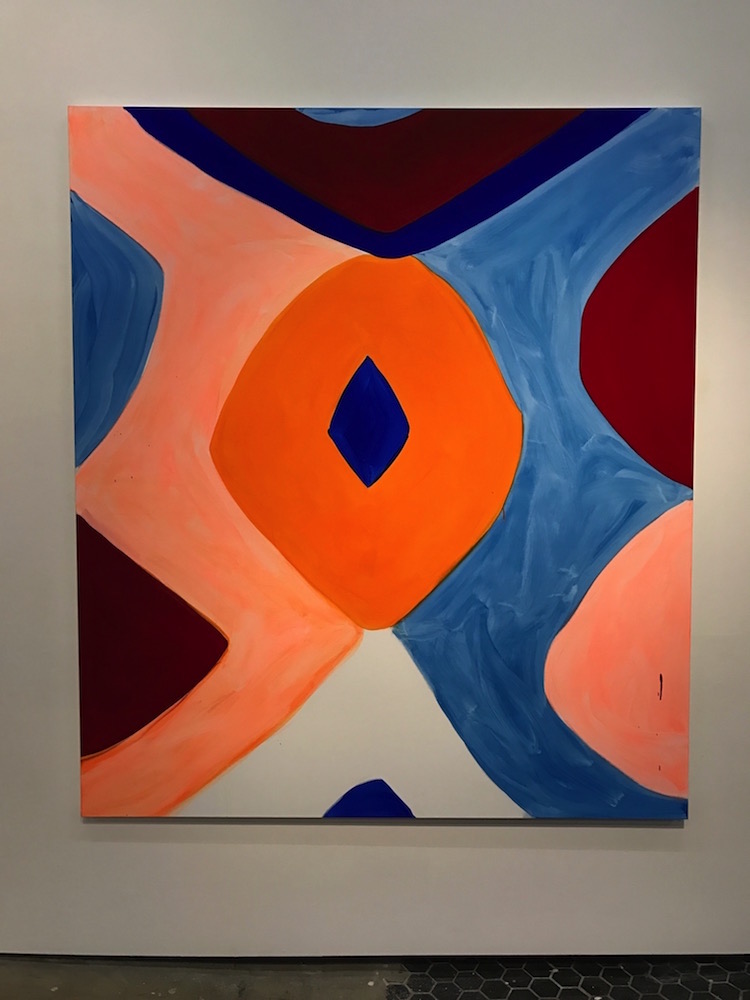 What do you want people, when they look at these paintings, what are you hoping they …  They can think whatever they want. It’s not about an idea, it’s more about an experience. It’s about calming down. It’s about gaining some kind of peace and measure in one’s day. And they’re also about healing. And that’s one of the powers of art, and certainly one of the powers of color, that they can heal. I want there to be magic–that ‘how can something that’s just paint on canvas be so much more than that’? And at the same time be just paint on canvas. Which is also one of the reasons that I leave the drips, unless they’re completely intrusive and distracting. They’re part of the process and the medium is what it is.

Almost timeless. Exactly. Something that can speak across languages and cultures. This is also I think one of the reasons I’m getting attention right now. It’s because the work is needed. I’ve always believed in giving what’s necessary as opposed to what’s desired. And I think that all of a sudden now, it’s needed.