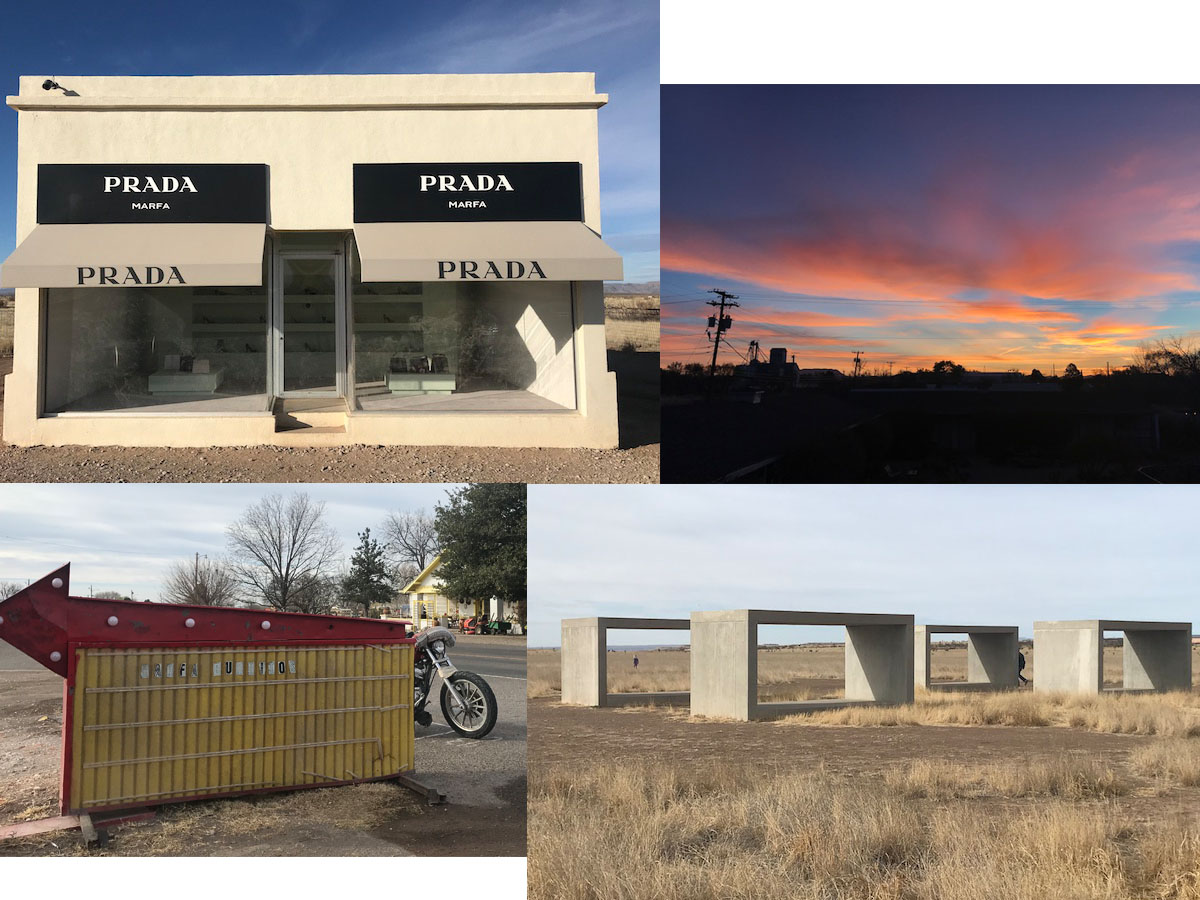 Last week my older daughter and I headed off for her Spring Break to Austin and Marfa, Tx–both new destinations to us. Austin was fun–though a little insane because it was the SXSW Conference, but Marfa reeled us both in on a deeper level.

Marfa is the smallest town I have ever spent more than one night in (the population hovers around 2,000). The main draw is art–specifically, though not only, the work and spaces of Donald Judd. At one point he owned 22 buildings and renovated many of them in his sparse manner to both show and create more work. Everything in his spaces has been left the way it was the day he passed, per his instructions. Marfa has since become a haven for other artists of all ages, but I cannot over emphasize how much of a one-horse town it still is. That is its charm–the art spaces are still few and far between, there is one place to really go for coffee in the morning, and maybe six places you can eat dinner. At 9 o’clock the main street corner (no stoplights in this town, just a corner of four stop signs) can be desolate. The freight train, the reason this town came to be, barrels (very loudly) through the center often. 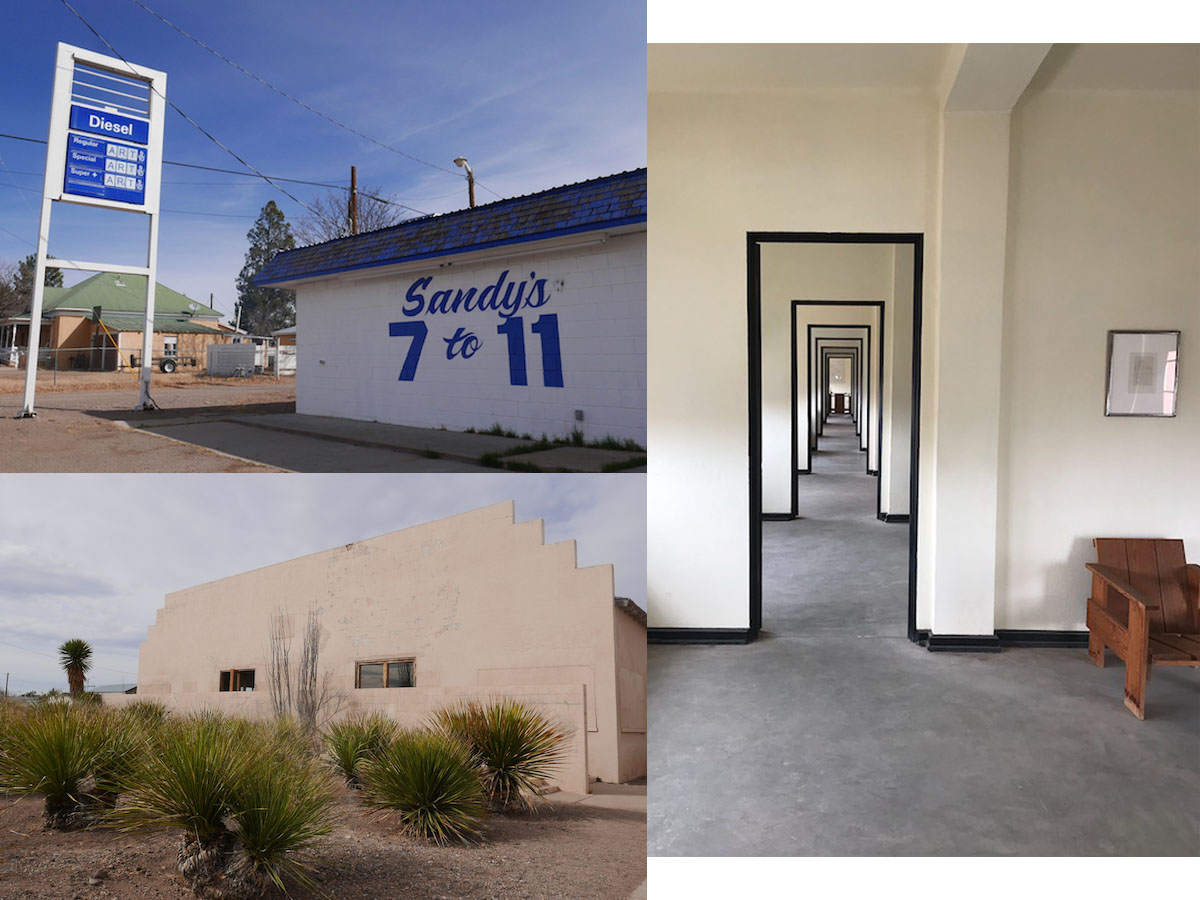 There are some quirky, fun stores here too–though like everything else, hours of operation are not always as stated. As an artist (who hopefully will be showing up on this site soon) told me, “It’s Marfa, people have things to do.” Below is a list of places we loved. (The food is as good as the art.) If you’re planning a trip (you should) my packing tips are: sunscreen, a hat (the sun in strong, it is almost a mile in elevation), boots or sneakers you don’t mind getting beat up (the “gravel” at some of the Judd spaces is more like deep beds of walnut-sized rocks and we watched one chic French woman ruin a gorgeous pair of kitten-heel boots navigating the terrain), clothes you don’t mind getting dusty (when it’s windy it’s a giant dust bowl), and water (it’s dry, it’s hot, there aren’t any water fountains). Also be nice to everyone–you’re likely to see them again and again.

To stay: The Thunderbird Hotel, a minimalist renovated motel that is not at all expensive. Though in retrospect we found some pretty good houses to rent for the same price on Airbnb. Next time. (We thought we wanted to stay in a renovated airstream at El Cosmico but the place was packed with other people who brought their own tents, we were glad we didn’t.)

To eat: Coffee + toast at Do Your Thing or breakfast/lunch burritos at Marfa Burritos (walk up to the kitchen door and the owner, who speaks no English, will take and make your order, the free coffee is decent, try the green chile salsa sitting on the table). Chicken and biscuits were really good (this coming from someone who grew up in the South) at Water Stop, which is open for lunch, plus they have vegetarian/vegan options. We ate two nights at Stellina, which has excellent homemade pasta and one at Capri across from our hotel (I highly recommend the spicy Chihauhau cocktail) where everything from the cheese + charcuterie plates to the cacao cinnamon ice cream were great. Plus there are fire pits and huge garden so you can just go for a drink. We didn’t make it to Restaurant Cochineal or the Food Shark truck for lunch, but need something to go back for. 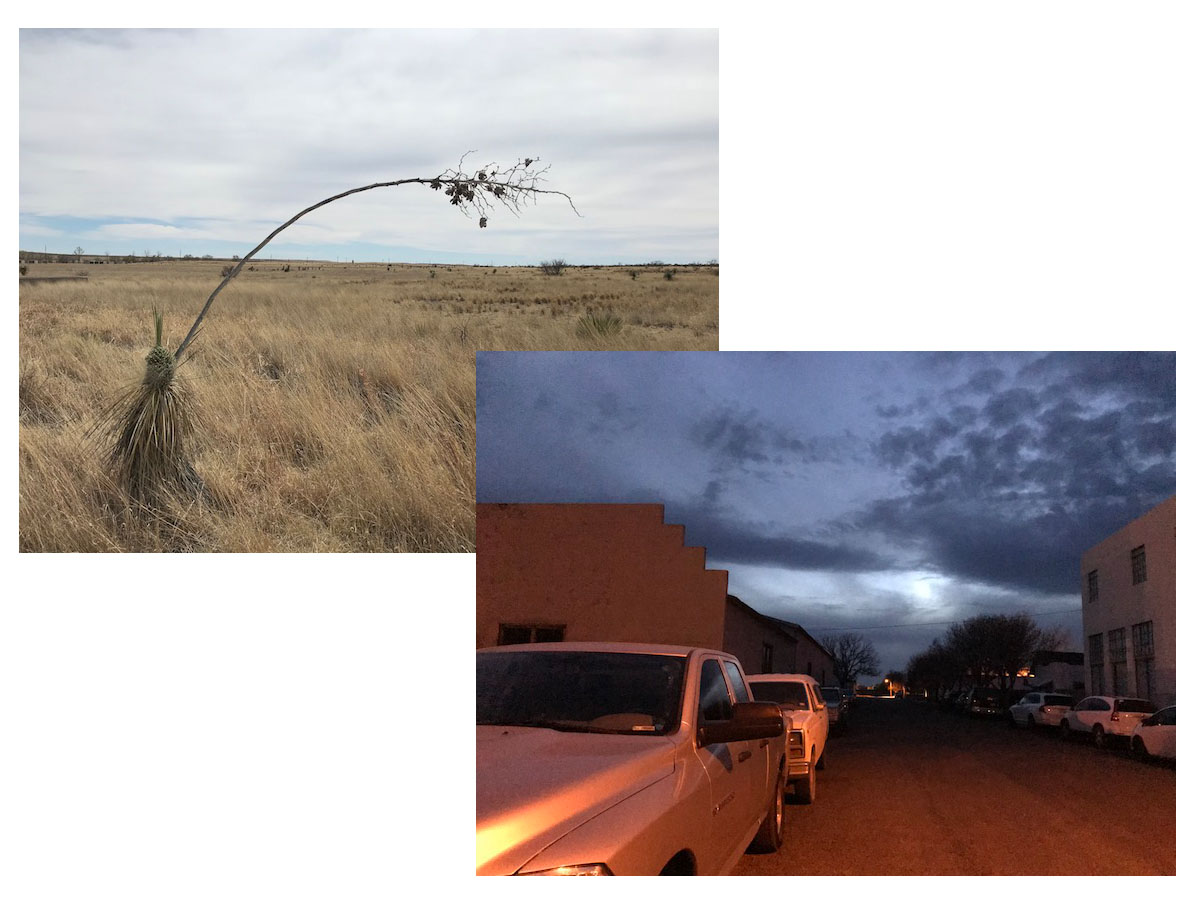 To see: The Judd Foundation offers two tours–one of the artist’s home, La Minsana, the other of his studios. Both were under two hours and we did one in the morning, had lunch and followed it with the second. They were fascinating. Then the Chinati Foundation has more Judd just out of town along with other artists, plus an in-town building of Richard Chamberlain. Some of it you can see with an entrance fee, some of it requires an extensive 4 to 5 hour tour commitment and that was too much for us. There are also some small gallery spaces in town and Ballroom Marfa which has rotating exhibits. Note: The Prada “store” is actually about 40 miles outside of Marfa. If you are driving in from El Paso will you will pass it on the highway.

To shop: Don’t miss the Marfa Book Co. in the Saint George hotel. The bookstore also sell prints from various artists. Designer John Patrick has a place for hats and his designs, Communitie on the main drag. Mano Mercantile and Raba Marfa both have good vintage finds, and we bought everyone soap at Marfa Brand Soap. Tiny shop Freda and Mirth are worth seeking out, plus there is another vintage store next to Mano that just wasn’t open when we were there. (Can’t remember the name.)