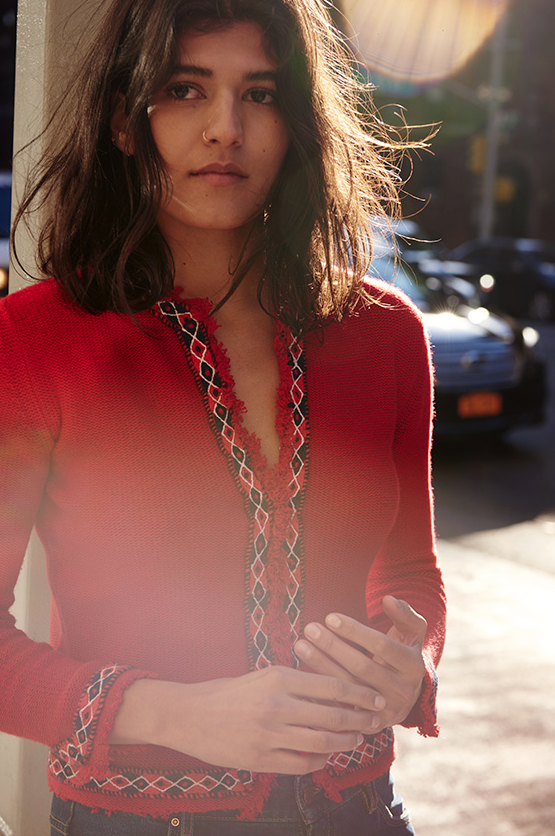 I am such a fan of designer Cathryn Collins and her line of exquisite, artisanal cashmere shawls, sweaters, jackets and more, called IPEZZI DIPINTI, because she is almost borderline obsessive about the craft of her pieces, and the artisans–in Italy and India, who make them. (I wrote about her line in the fall, link here.) Her eye is superb. And her penchant for mashing both the urbane and bohemian together makes for unique, timeless designs. A IPEZZI DIPINTI shawl or sweater is a have-forever piece, the kind you pass down to future generations.

While she does sell a few pieces online and by appointment at her showroom,  she is the master of trunk shows, and her New York City trunk begins tomorrow and runs through the week. (London, California, Aspen are other usual stops.) If you’re interested in attending email, info@ipezzidipinti.com. At a personal showroom preview, Cathryn shared her inspiration, why navy is so important and why her favorite piece is a little out of control.

What inspired the new Spring collection?

I think the way I end up creating a collection is, it’s like drops of water in a bucket. I start collecting ideas over the course of a year, sometimes years and years and they go into a folder—pictures, actual fabrics or accessories. Then when I’m ready to start designing I go and look at what’s there. Ironically almost every time, there is some actual defining logic to all of it of which in some cases I’m aware, maybe color orientation but in other cases I’m actually unaware.

I think this time there were two things that were really driving me. One was the, I don’t want to call it crude but I want to say more rough embroidery that I have been looking at in Berber pieces–Moroccan pieces from the Atlas mountains. Also in French table linen. Actually going back to the hand-embroidery of the 1700s  where you really felt the hand of the embroiderer and often on very humble fabrics. Even though the embroidery [on IPEZZI DIPINTI piecs] is much more regulated and meticulous than something you might find on a Berber piece, there is still this irregularity either because the embroidery thread has been hand spun or because of the hand spun nature of the linen fiber that it’s going through. You feel the irregularity. You almost feel the wear in it. 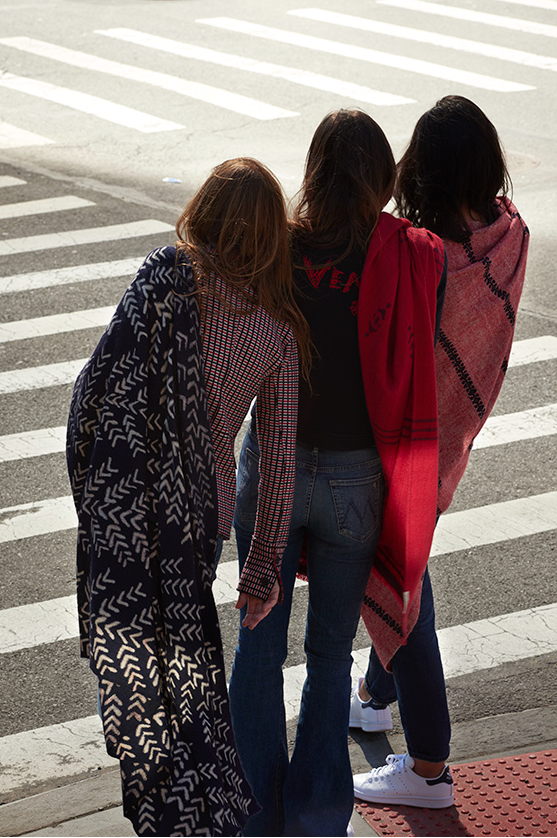 I tried to replicate in cashmere, not just the kinds of stitches and not just the look, but the actual stitches. What’s crazy is is that the cardigans that the borders on them (top photo), they’re not actually done on the sweaters. They’re being embroidered in cashmere, on cashmere, and then applied with cashmere thread to the cashmere. It’s nothing that anybody is doing in Italy or anywhere else in the knit-wear world.

They must be very labor intensive.

They’re incredibly labor intensive but they’re kept in this very narrow palette. The palette for Spring is a couple of different blues, more marine blues, navy, a very true red, a more coral-y red, and chalk.

I feel like navy is better than black for spring and summer. Why do you like navy so much?

I like navy for always. I’m a uniform person. I would say I wear dark navy, black or white 98% of the time. We aways do dark navy. After black, it is the most popular color of everything we make for clients. It’s not even about spring. 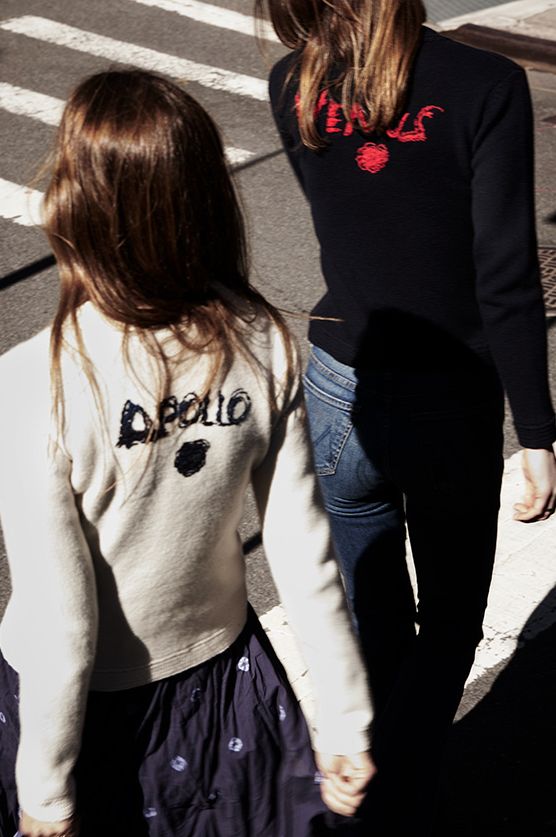 What was the inspiration behind the Venus and Apollo pieces?

Every season I do sweaters that have messages or words down the back that usually have a relevance to what’s going on in the world. An example would be we did one with Mandarin Chinese characters that said “Made In Italy”. They’re meant to be a little tongue-in-cheek, cause for discussion, but from the front they look totally normal and if someone happens to see the back they might say ‘what in the hell is that.’ I was in Paris and went to the Cy Twombly retrospective. I liked the fact that his works were whimsical, other-wordly, ancient and modern all at once. They weren’t angry, they were almost dreamy. Venus and Apollo were in two of his paintings.

The sweaters are custom.  A person can pick their base and they can pick the color of the embroidery—in blue, red or ivory combinations. It follows the theme of being able to pick your colors for tye-dying sweaters and furs we also do custom for people. Increasingly we’ve gone away from making very basic things. We’ve been making crazier sweaters which are either jackets or cardigans.

I feel that if people are going to invest in one of these pieces it should be something that really is forever. Now you can go buy a great cashmere sweater, a useful utilitarian thing, at Uniqlo or Zadig & Voltaire. So if you’re going to get a v-neck sweater from I PEZZI  I’d rather have it not have some bell and whistle that’s just there as sort of trick but something that actually gives it integrity and this sense of where it came from. Or somebody’s hand on it that you would absolutely never get anywhere else. 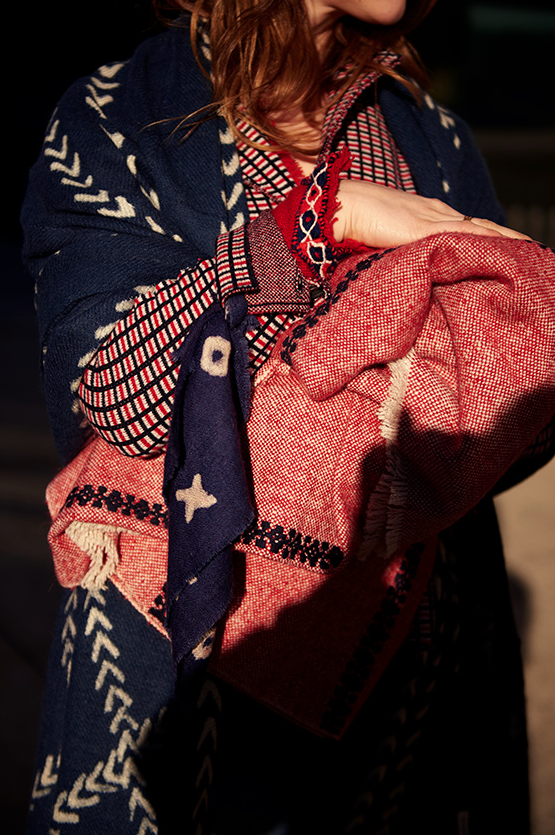 The ink stained shawl one of your favorite shawl pieces.  What was the idea behind it?

First it’s got all the blues in it. Second, I like the idea of things that are intentionally but visually pleasing in their messiness. I think I’m so edited in my dress, I’m so almost severe, that I like the messiness of something. I’m all about symmetry and a certain element of restraint so I like something to be… 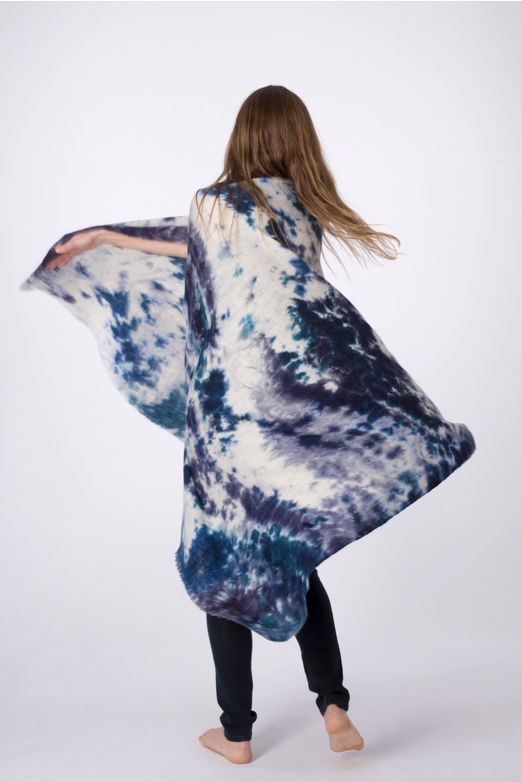