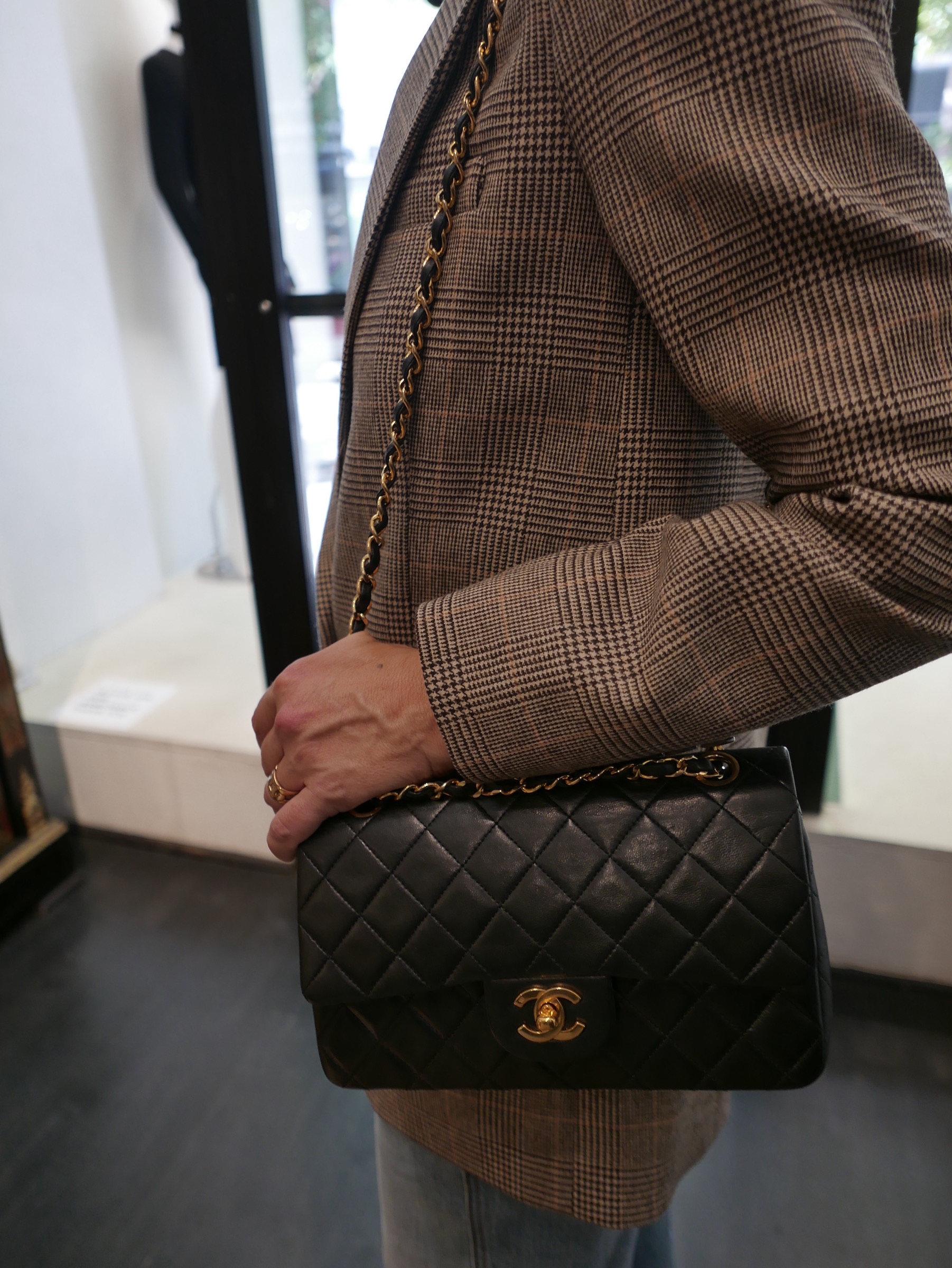 This is the first in a series of in depth looks behind classic luxury items that withstand the test of time. It’s part of my Style, Substance, Sustainability focus this year, because I believe we need to buy less, buy better and look towards beautifully made pieces with longevity. Hence, the classic Chanel 2.55 bag (named because Coco Chanel launched it in February of 1955). Before you run out to the Chanel boutique and max out your credit card for one, I am going to tell you, you should, without doubt, buy vintage. Why? There are so many reasons, but the top is it’s a better made bag. Don’t take my word for it, take Richard Ives’.

“I have many customers that buy new Chanel, including the bags, but if they want a classic bag, they buy a vintage one because you can tell the difference immediately,” says Richard Ives co-owner of designer vintage boutique, Pilgrim, on Manhattan’s Lower East Side. Richard has been in fashion a little bit longer than I, and his boutique is a must stop for most major designers and stylists seeking inspiration or pristine vintage, mainly from the 80s and 90s. Richard knows Chanel bags. In fact, years back Chanel endorsed Richard’s store as a place one could trust to buy vintage Chanel (I cannot emphasize how rare that is for Chanel).

When you hear Richard tell the story behind each detail–the bag is a representation of Coco’s life, and why vintage is better, you might feel the same as I do, which is “why didn’t I ever buy one and now I better put one on my wish list”. (Plus vintage bags are less expensive.) And, if once you read our interview below and decide you need one now, I suggest you call Richard immediately. Apparently, The New York Times has gotten wind of his expertise and are going to do a story on Pilgrim any day now. (Of course, he gets them in often so you can wait if now is not the time. It isn’t for me. Yet.)

Why is it a 2.55? 2.55 stands for February of 1955 when it first debuted. It’s now used as a serial number for Chanel. There were quite a few different styles. They did the classic, which is a nine inch double flap bag. Then there was a full flap, which is the most popular next to the original because the design looks really modern; it doesn’t have a double flap on the inside so actually you can fit more into it. The full flap is still a 2.55, just a different variation and because they don’t make that version anymore, it’s a little more special.

Why the 2.55 details matter: Coco was a Leo, and often in a lot of her designs the details reflect her personal life, starting out with the quilting. Coco Chanel was obsessed with horses, horseback riding and jockeys, who all wore quilted clothes. There are variations of quilting, the classic crosshatch with the vertical horizontal, the chevron. When you open the bag up, you’ll see a little secret zipper compartment [on the underside of the flap]. Coco was having an affair at the time and she wanted to be able to put her love letters in there. Her boyfriend, as opposed to her lover, didn’t know what that was for. It’s not really big enough for anything else, and it’s a charming detail. Coco was raised in a convent by nuns; the burgundy interior was the color of her uniform and the chain was based on the chain the nuns carried their keys on. Then, she felt if they didn’t carry anything else, all women should carry lipstick, so she put a lipstick holder in.

Why the chain made it a revolutionary design: Coco talked with her hands, she smoked, she drank, she hung around with men. She wanted women to be free to do those things. At that time, handbags were held with a wrist or your hand. They would have never carried a cross body bag. But it’s a misconception that Chanel bags all being cross-bodied. They’re not, they’re shoulder bags. You are also supposed to shorten the chain so it fits your body.

Why a vintage 2.55 is better made: They were handcrafted; it took 23 people two weeks to make one bag. The hardware and chain were gold-plated that was dipped several times. Now it’s ruthenium, which is brass over nickel. The bags were guaranteed for life. When you’re talking about luxury, that just doesn’t exist anymore. [Chanel no longer repairs bags over 5 years old, but don’t worry, Richard says Leather Spa is the next best thing.]

Are you longing for one now too? Plus Chanel vintage is usually about 30% or 40% less than a new bag, at least while Richard can still hunt them down. Like wine, there are good years of Chanel bags and not so good ones, “Even though they were handmade for a long period of time,” Richard continues, “there was a certain period where they were the best made. And not to say that you can’t find really spectacular pieces that are older, but they may have been glued together, they may have been lined in something that was not going to last. The materials have disintegrated. There were many issues with the gold plating.” Luckily Richard knows the good years, how to read the serial numbers and other tell-tale secret signs that authenticate an original bag. The bag I am modeling above (sadly it didn’t come home with me) is from 1989 and it is pristine. Some day in the not distant future, it will be hard to buy a bag this well-crafted, but it will forever be an icon.