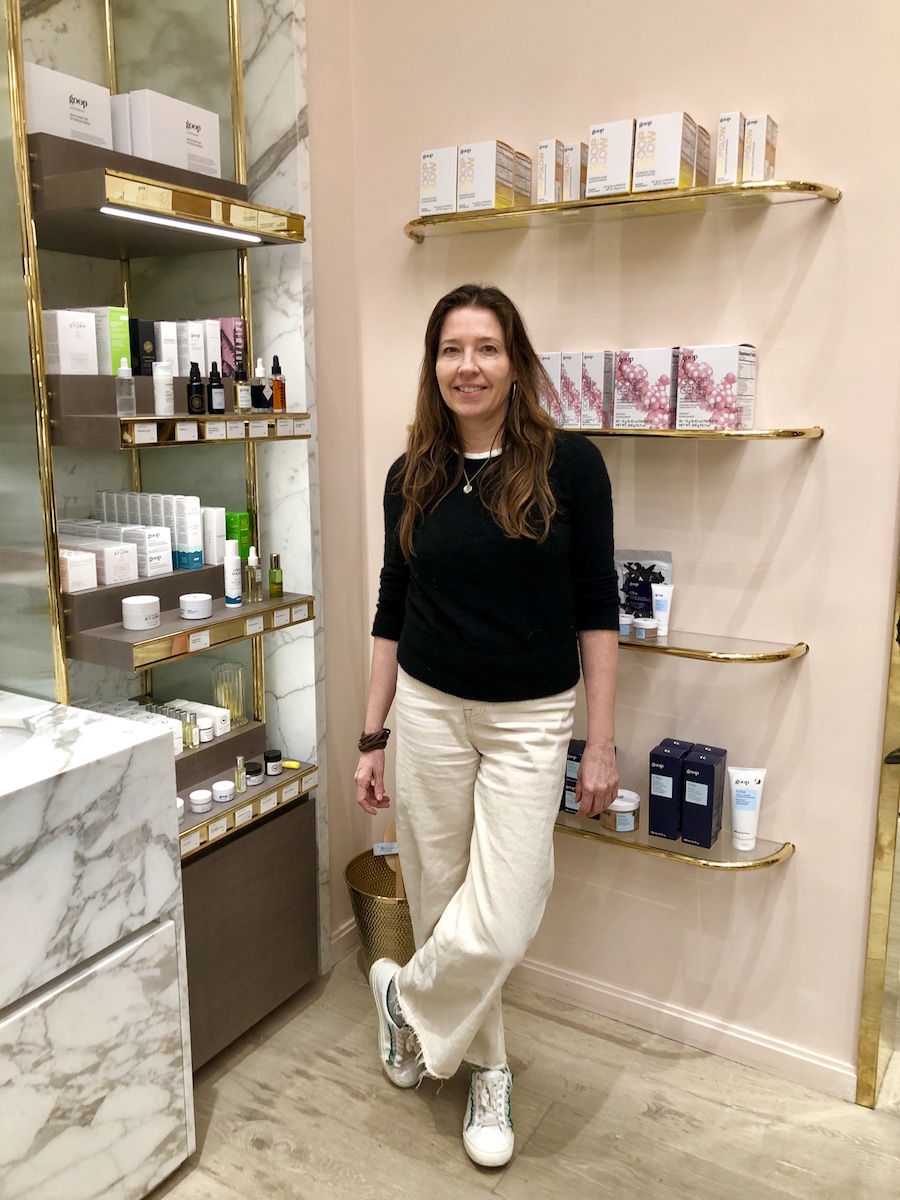 I prefer pragmatic, no-duh beauty tips, the kind that don’t involve 20 minute YouTube videos. So when I found out Jean Godfrey June was hosting Clean Beauty Swaps at the NYC Goop store, I immediately signed up, partly in self-interest because there are a few areas I have yet to go clean, and also for you, dear reader, as I would encourage everyone to clean up their beauty routine as much as possible. I have known Jean for eons, since our days at Lucky magazine, and what I have always loved about her attitude towards beauty is she makes it approachable and easy, which works really well for someone like myself, who finds wondering the aisles at Sephora a special kind of torture. Plus she excels at doling out why-didn’t-I-think-of-that tips, such as using my favorite Kosas lipstick as a blush. When we met at the store, I quizzed her on No Brainer Basics, Next Level Swaps, My Personal Swaps + a Quirky Thing She Swears By. The best part, switching up products doesn’t have to cost you a fortune, you can easily make 4 clean beauty swaps under $100. Enjoy!

2. SUNSCREEN. There are all kinds of the usual phthalates and parabens in regular chemical sunscreen, but in addition to that, chemical sunscreens have some of the most irritating-to-your-skin ingredients in the beauty industry. So you’re putting something on your face every day to make yourself not age, but you’re going put something that’s irritating to it? Everything that I’ve learned about is that irritation and inflammation cause problems. The other thing about chemical sunscreen is that the reason that the packages always say, “Reapply after two hours,” (like you’re going put your sunscreen back on after two hours), is because chemical sunscreens degrade in sunlight. So if you’re putting on your daily SPF at eight in the morning, and then going out to lunch and sitting out in the sun at noon, it’s not working. So you put something that potentially irritates your skin, and could contribute to inflammation and aging, that isn’t even doing what you want it to do. So, then the last reason is if you’re going on the beach, chemical sunscreens … Hawaii has banned a bunch of the main brands, because they kill coral.

So chemical sunscreen, I feel like, why do it? It’s very easy to tell a chemical sunscreen from a mineral or clean one. You just look on the back, and where it says, “Active ingredient,” it should say, “Zinc oxide,” or “Titanium dioxide,” or both. If it says anything other than that, then it’s not a clean sunscreen. You can find them in the drugstore. The other thing, titanium dioxide and zinc oxide are what they use in baby bottom cream. Instead of being irritating, it’s the opposite, it’s soothing, and a good thing for anyone who has aging skin, acneic skin–any kind of anything.

The one I love, super love, is from Ursa Major, it’s SPF 18, which, for me, is good, for every day, it’s not like I need to be 50. Probably some dermatologist would get mad, but we have 50 for those people that want it that’s from Naturopathica, which is amazing. I actually keep that one in my makeup bag. I keep the Naturopathica 50 in my makeup bag, just because I feel like it’s always the time that you don’t have sunscreen that you’re going to be in horrible intense sunlight. You’re somewhere, and they’re like, “We’re going to do this event in the garden,” where there are no trees. Also I feel like backs of hands are the most aged parts of our bodies. Whenever I think of it, I put a little of that 50 from Naturopathica on the back of my hand. Certainly if you have an SPF 50, it’s going take an extra second to rub it in. It’s worth it.

3. CLEAN BODY WASH. Super important in my books, because you are putting it all over your body, and you’re also inhaling it with the steam in the shower. It’s an easy one to swap out, because there are really great options in clean. There’s no compromise to be made and people are always worried about compromise. The new one from Goop is called G.Day, and it’s spicy, invigorating, it just gets me going, and puts me in such a good mood. Gwyneth has an acupuncturist/herbalist, who works with her on them, and he puts in everything that’s going make you feel fantastic. A little goes a really long way, and your whole shower smells amazing.

4. FACE OIL. You can find face oils that are not clean from conventional brands, but most face oils by the nature of what they’re made of, plant oils, are clean. Face oils are much more clean than, say, a moisturizer, which is full of texturizers, fragrances, and all kinds of things. I love the Goop one, obviously. My thing with face oil is I feel like women have been using it since the beginning of time. And then we got this idea that we’re like, “We must have moisturizer.” Which, moisturizer has its place, but to me, I feel like oil, if you just put it on all the time….I always have on my kitchen counter, because I walk through there and I’m like, “Oh, yeah, just put a little extra on.” I refresh a lot. If it’s a Saturday, I probably put on face oil four or five times. My boyfriend makes a joke about how I can’t see out of my sunglasses because they’re covered in oil, and how my phone is…like the pictures are blurry. I don’t usually refresh all day, say, at the office. But, the best thing to do with a face oil, in my opinion, is it’s like 4:00 pm, and you’re thinking, “Ugh, do I need to put more makeup on?” You do not need to put more makeup on, you just put a little pump of face oil, not a lot. You don’t put it on your eye makeup, but you put it under your eyes, over your lip, and then you wait a second, and it will sink in and then it will zhuzh your makeup. Hence, the stealth use of face oil.

5. SELF TANNER. I’m a huge self-tanner, it was the last thing that I went clean on, because I was like, “I have to have my correct self-tanner, it has to be the right color, it has to blend.” Not everybody is into self-tan, but if you do, there’s this product from Vita Liberata. It’s better than any … I mean, self-tanner can be so wrong. This one, it’s called “tanning water,” and you squish it out and it’s like a mousse. It blends perfectly, and you have lots of time to blend it, and then it dries. A lot of times a self-tanner will dry and it’s like you’re encased in a shell, but this is not like that at all. And it does not transfer. You could put that white robe on, and go around, and it will not transfer at all. The color is perfect: it’s super subtle, but it’s also there. It’s the best, best, self-tanner that there is.

2. JUICE BEAUTY MASCARA + EYELINER. First, a liquid eyeliner. I am a super believer in liquid eyeliner. I think with almost any kind of makeup, if you go with the most intense pigment, you can use much less of it, and it gives you a sort of wake up. It’s good to have a little eye moment, if you’re anywhere near my age and a little liquid eyeliner is so much better than a pencil because it’s darker, more intense. You need way less of it, I just do it on the last third of the top of my eye, and you always have Q-tips, and that’s how you get it to not look like eyeliner. You think of just inking in the lash line.

Then their mascara. Conventional mascara is made out of a by-product of coal tar combustion. It’s really nasty. We’re putting it in our body at the end of the day. There’s all different kinds of clean mascaras, I’ve tried clean ones where I’m like, “Why am I wearing this? I don’t see anything.” For me, this one gives enough mascara, it’s like the mascara we’re used to. It makes us wake up, it looks great, it doesn’t smudge, and it lasts all day.

3. LIPSTICK + LIP BALM. You consume lip products, so going clean in that area is a good idea. My all time favorite is Olio E Osso Balm in French Melon.  It’s super bright looking, so you need less of it, but it’s also sheer. I have one in my car, one in my makeup bag.  You can do your cheeks and your lips and it’s sheer enough that you can do it and not look in the mirror. You’ll be like, “I look alive.” The other product that’s like that, it has the same quality is Kosas’s lipstick in Rosewater. I put a little on the cheeks, and the lips and it just ties it all together, and looks natural.

2. BODY MOISTURIZER. Grown Alchemist, they’re this Australian brand, and I’ve always liked them. The lotion smells amazing, plus I just love how they look. They just came out with these big pumps. I love the whole brand, but I love their lotion, especially. The other thing is I hate putting lotion on in the winter when I get out of the shower because I’m always cold so the other thing I recommend is a body scrub. The G. Tox is epic, and it has oil in it so your moisturized. This one smells a little herby and if that’s not for you Beauty Counter has one with brown sugar and lemongrass.

3. SHAMPOO + CONDITIONER. This stuff from SEED. I have very intense standards for shampoo and conditioner, because I don’t style my hair, so I can tell the difference if it sucks and this stuff is amazing. They’re a totally clean company that’s run by L’Oreal, and I feel like they know so much about hair, and they were somehow able to bring that into these formulas without all the toxins. I mean, haircare is one of the worst for toxins. You use it all the time. And you’re using it around your head.

COCOFLOSS. Try this and you’ll never, ever, go back. It is floss from these women dentists in San Fran. It’s so cool, and they come in all these different colors, and different flavors. It’s thicker than regular floss, as you can see, it’s made out of coco fibers. I don’t know how to explain it, except you have to try it. I just was at the dentist, there were all these problems, but ever since I started using this, they’re like, “You’re very good at flossing.” It does the job much better, and it also feels better. And it smells better. When my daughter comes home from college, I always laugh, because we’re like, “The floss is gone, she stole all the dental floss.” Once you try it, you’re like, “I have to have that.”

This error message is only visible to WordPress admins

Make sure this account has posts available on instagram.com.