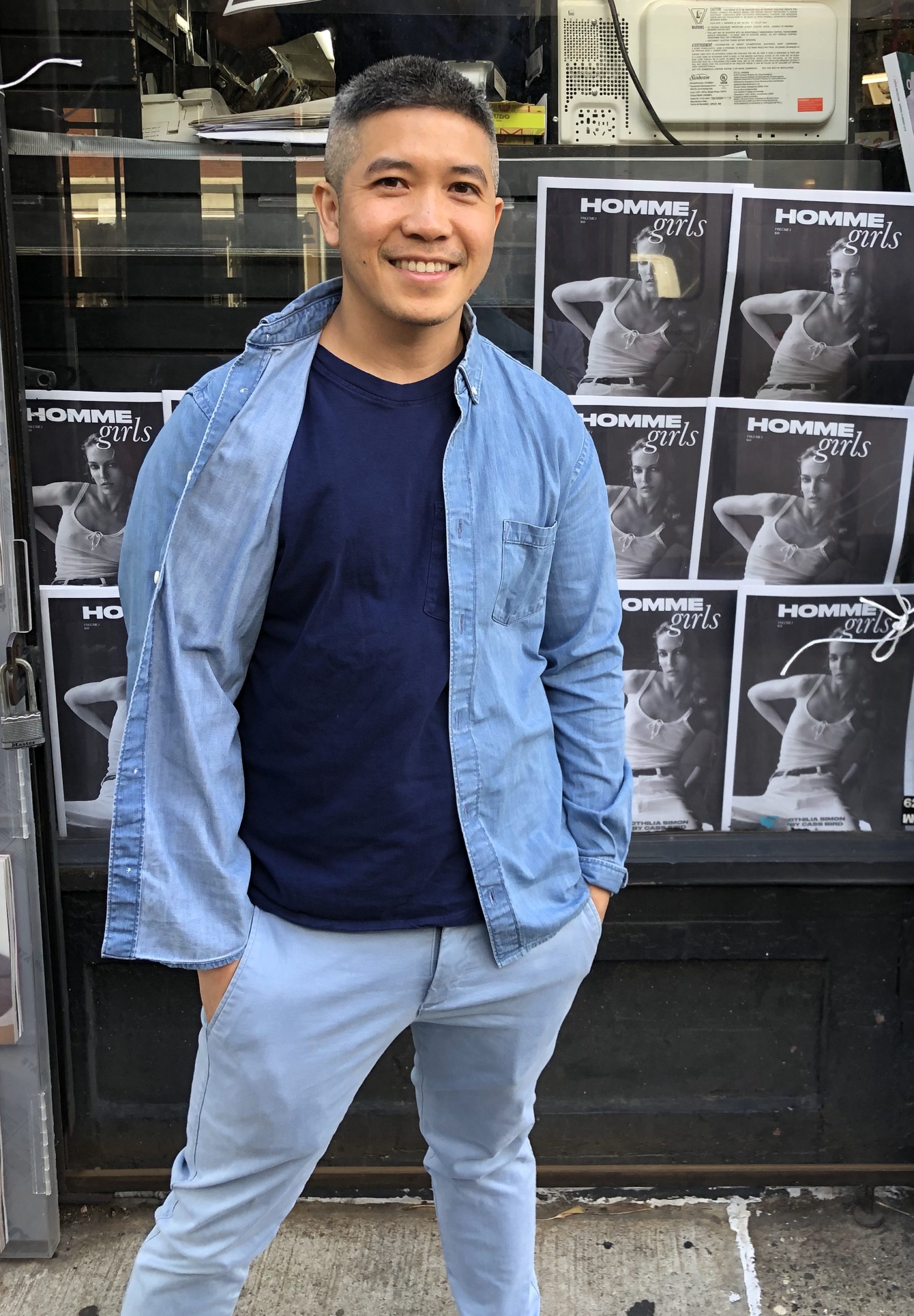 I first got to know Thakoon when I was at Harper’s Bazaar as the fashion features director and inherited a stellar team of talented people, Thakoon being one of them. Thakoon went from being an editor to an award-winning designer who dressed women like Michelle Obama in a relatively short span of time and I have thoroughly enjoyed in watching his career flourish. So I was thrilled, and not all surprised, to see his latest venture, HommeGirls a magazine/site for “girls who like boys’….boyfriend’s…and the men’s department” which he dreamt up during his recent design sabbatical. I always prefer the gamine/tomboy mix of style icons like Lauren Hutton and Jane Birkin, and it’s refreshing to see this attitude on other modern women featured in his magazine. (Women shot and styled by other super cool women such as stylists Elissa Santisi and Laura Ferrara, and photographers Cass Bird and Vanina Sorrenti.)

I have long been considering introducing men into the Flair interview mix–men who dedicate their thought and creative energy to making women’s lives better and couldn’t have more excited when Thakoon agreed to be the first. Oh, and if you miss his designs like I do, stay tuned this coming September.

What made you want to launch HommeGirls? I was frustrated that fashion now is not talking about style. It’s just talking about the next trend or the next destination for the next big runway show. It’s talking in terms of entertainment. It isn’t talking about practicality and real women’s lives and what they need.

Instagram has magnified the entertainment aspect of every fashion company. And they all fall into the trappings of more likes, more followers and what’s going to capture that. But then on the other side of it, as a designer, I see customers complaining that you can like a beautiful post from a designer, but that doesn’t mean you’re going to buy that piece. In fact, it’s too expensive or it’s for an occasion. The realities are not there for everyday woman.

Then on the other spectrum you have fast fashion. And that’s eating up a lot of the consumption for women because of the fact that they don’t have practical clothes to wear. Fast fashion provides practical clothes, but cheap clothes too. For me, I thought, “there’s this dichotomy here, but no one is talking about style at all.”

I grew up in a time when I was interested in fashion because there were gorgeous women who were personalities. You saw the fashion, but the fashion was secondary to the women, like beautiful Bruce Weber and Peter Lindbergh pictures.

So I thought, “okay, there’s something here.” Then I researched further because I was thinking, “do I want to be in fashion anymore? And if I do want to be in fashion, what is it about fashion that I like?” When I was digging I realized that the women I respect and love and appreciate, their own sense of style is much simpler than even some of the images that they were making. I was more interested in their personal sense of style. The takeaway from that was they always subscribed to this idea of menswear, or the simplicity of men’s clothes.

And then post-Phoebe Philo, everyone was up in arms. Like screaming.

But nobody was asking why everyone was freaking out. The bigger picture was that there was going to be no place to go to now for women for tailoring.

Who is the HommeGirl woman? I feel that every girl that I know is a HommeGirl. In the beginning I was looking at images of Christy Turlington in the 80s in a Calvin Klein blazer. That’s a HommeGirl to me. Or Gia Carangi photographed by Arthur Elgort in a shirt that’s rolled up, high-waisted jeans and a belt. That’s a HommeGirl attitude. It’s this idea of a tough tomboy but a sexy sensibility that comes through. It’s not about the girl wanting to be masculine. It’s about the girl owning her sexuality, her own femininity by subscribing to the idea of more loose-fitting or tailored pieces.

Why do you think that’s relevant now?  I think it’s always been relevant. It’s more relevant now because there’s a bigger voice in gender fluidity and in acceptance of being who you want to be. That’s why the energy is much stronger. But if you look, it’s always been there. Women have always subscribed to this idea that you don’t always have to show off your body.

It’s more… who’s leading the conversation about what women should wear? I think women are owning that conversation. Which I think is right and I think it’s important. I think that the movement of the younger generation is completely refreshing. And refreshing for the older generation too, to be like, “I’ve always believed in this. Thank god it’s a bigger movement.”

For instance, my older daughter and I are always questioning, “why do the Nike’s have to come in pink?” We both hate pink. We go into Kith and I think, “why are the men’s clothes so much better than the women’s?”

Exactly. I love pink, but you don’t need pink on a sneaker sometimes. Why does a North Face jacket have to be nipped for the girl? Why can’t it just be like a man’s but with the shoulders taken in a little bit. Why do men’s blazers have better construction? The shoulders are better, the pockets are better.

Because men care about function and over time that’s what has resulted. I think that we should be talking about functionality and practicality for women’s clothes too, you know?

In a digital age why create a magazine? I’m an analog person. I buy records. I love cassettes. I love old movies. I love magazines. Part of what this is an exploration in beautiful images. I want to create new beautiful images. That was so much a part of my childhood and I feel like we’re running out of references. Everyone keeps rehashing the same old pictures, the same old references and there’s nothing new and once you run out of references, I think it’s sad for the next generation to not have things to look at. So part of this is I want to discover new photographers, new talent and give them a platform to showcase imagery. That’s why I think a magazine is important. I also think that a magazine has a tactile component that resonates. The actual physicality of flipping through something and seeing something big absorbs into your mind deeper than anything that’s digital, when you’re just like swiping through images.

When you have to take the time to do something, it becomes more ingrained in your mind. Yes. We live in a culture where we’re passive participants in everything, where you can just sit back and information comes to you. We never have to seek something anymore. When I was younger we had to go to the library, we had to go to the magazine store. That act of discovery opens up your mind in ways that you can’t imagine. When you get older, you realize that is so valuable.

Will there be more HommeGirl issues? I’m doing a quarterly and working on a second issue right now. It’s not just a magazine, it’s going to be a platform that speaks in different layers about this idea. So it can be a conversational place where we get into political topics, empowerment issues. Rules of dressing issues–like why do men have uniforms and women don’t?

Very few do, I’m always so impressed with women like Tonne Goodman or Grace Coddington who stick to one look. And how about the fact that most men designers who design for women wear uniforms?!

Also, I was watching MSNBC the other day and Katy Tur is always in a blazer and a shirt. It’s so refreshing. She doesn’t subscribe to the idea of wearing an illusion dress on air. That speaks volumes to me. It’s those subtle cues that resonate about where women need to own their conversation about what they deem acceptable in the workplace.

I think what’s good about fashion now is that there has never been a better time for people and for customers in general to have options. They have more choices at better prices. So the difference between fashion then and fashion now is that the word fashion has become a different entity all together. It’s not just designer rarefied world anymore. It’s actually democratized, bigger to the masses, which I think it should be.

So then there lies the bad part, which is more people should know about style from more than just one voice, because I think a lot of what’s out there is a very dressed up world of women’s fashion.

It’s not reality. Dressed up in that “makeup done, hair done, everything is to the T with heels”. In this fast paced world, you actually should be the other way. I think the Homme for HommeGirls is to be able to counterbalance that a little bit.

I’ve had a lot of people already say, “This is resonating with me so much.” Even young girls say, “I don’t want to wear heels.” And they’re feminine. It’s just practicality.

My daughter is wearing a Reformation dress and her Converse to graduation.

It’s also like, okay, we’ve done these stories, for instance classics. What are the new classics? Let’s discover that. Let’s find that because I’m sick of classics too. They’re good but how many times can you see a trench?

I think the idea too as I get older, proportion is really important–that’s the tweak that makes something modern now.

That’s what I want to talk about in the styling of the clothes for HommeGirls. The shirt can stay a white shirt, but it’s the proportion in how you wear it. Like Celine’s new proportion is not a new proportion, you just haven’t seen it in a while.

That’s what I mean. Hopefully we can discover this together. That’s the fun part.

« My Summer Staple
Podcast #3 Is Live: A Conversation with Jennifer Grove of Repeat Roses »