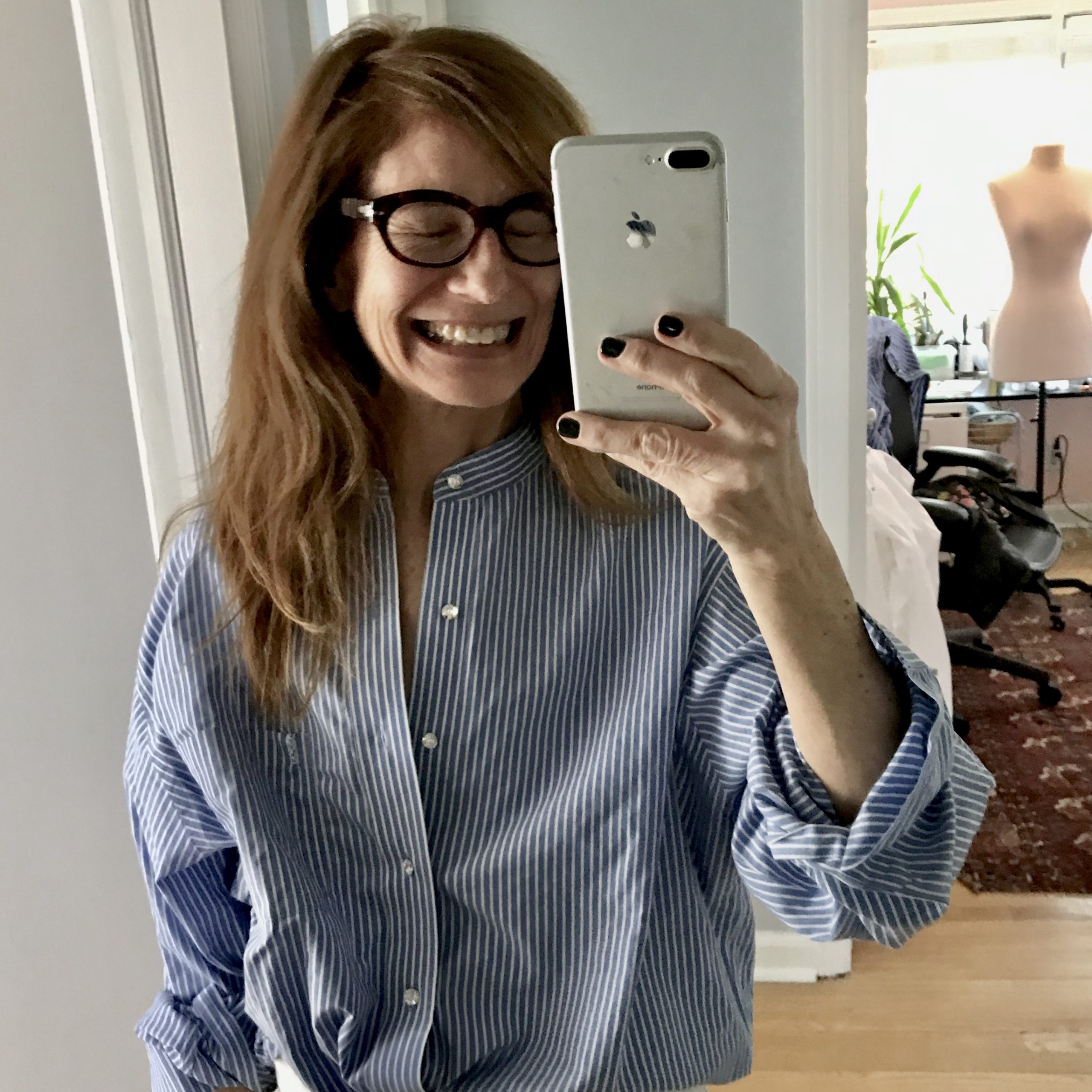 Going forward, integrity is going to be a required trait of anything featured on The Flair Index. It’s something I’ve always believed in and more and more it’s a trait that must be integral to how we move forward and live (and I will try to explain more later today in Instagram). So with that in mind, I am thrilled to share this new collection, A Shirt Story, by a long-time friend and colleague Sasha Iglehart (above). Sasha and I go way back, over 20 years when we were both at Harper’s Bazaar. She is one of the most genuine, positive, easy-going women I know; when I was pregnant with my first, she was pregnant with her second, and I counted on her advice and help immensely. Everyone in the fashion industry who knows her, loves her–she’s that kind of person. She also is thoughtful, so it is no surprise that with her new venture she came up with a way to make upcycling super chic by reworking vintage men’s shirts with new details and adding a bit of bling with crystal buttons. Because the shirts are vintage, they are one-of-a-kind. They also play into the idea of creating a uniform, something Sasha and I both believe in. It’s hard to pick a favorite–I love the tuxedo ones and of course the blues (and have one of each)….and the stripes…and then there is one bandana print….You can wear them dressed up, dressed down, as a coverup. Plus they are priced around $190, so they don’t make a big dent in your wallet (which is also important moving forward). Here, Sasha answers a few ?s.

What was your career path to date before launching A Shirt Story: Getting into fashion and magazines seemed like a natural progression for me, although it was never a goal of mine growing up. Honestly I didn’t know how magazines worked not to mention a fashion department. In college I studied film, art history and interned at Interview magazine. I feel a bit like a Forrest Gump of magazines! Looking back, I was at Interview while Andy Warhol was making his silk screens on the other side of the “factory”. I was a fashion assistant and eventually an editor at ELLE (U.S.) as it launched in the US after a stint in Milan at an international magazine that shall remain nameless (cue the #metoo movement). But the highlight was working for Liz Tilberis and her incredibly talented team at Harper’s Bazaar. I was at Bazaar from start to end of her time there. Amazing. Don’t get me started!! My years at Glamour signaled the end of fashion magazines as I knew them..social media and the way we shop shifted everything including magazine job descriptions and eventually rendered experience like mine obsolete. At Glamour though came the relevant messaging of empowering women and championing women’s rights. However, the excitement of shooting Fashion with a capital F was compromised by budgets and honestly waning interest. But this is my world and through that lens my cultural and social perspective, it was logical that I would come to A Shirt Story. I frequently scroll through runway pics and I miss the excitement of being present at a great show. But fashion consumption must slow down. Resale is outgrowing retail and there is a reason for that. We all know there are unfathomable amounts of apparel waste. Buying pieces of quality and honestly developing a uniform of sorts is a small step we can all take. Investing in a shirt or a sneaker that will last and be worn is a zillion times better than an impulse buy bought for a party “tomorrow night”. I love men’s cotton shirts. Washing them, cutting the collars off, swapping buttons is so satisfying!

How did the idea of A Shirt Story come to be? How do you describe what A Shirt Story is? There was a pile of my dad’s shirts at my parent’s house in a donation pile. They were Brooks Brothers oxford cotton, so soft and well loved. I guess I had a creative impulse of some kind..I started giving them as gifts, then taking orders and selling them. A Shirt Story is really the Next Chapter in the life of these shirts. There is a story with each shirt. It does cross my mind who might have bought them the first time around. In the process of upcycling, I put in my own label. I forget if they were JCrew or Theory or Dolce. They all are winners! Someone didn’t want these shirts anymore but I do!!

Why is upcycling and creating something sustainable important to you? Finding men’s shirts in a sea of racks at suburban thrift shops is a challenge I get into. There are staggering stats of apparel waste. My kids are resale shoppers.  They are super aware of the environmental impact. And as much as I love looking at my Vogue Runway app I see it more as ideas and inspiration, I do feel in my gut that excessive waste and questionable working conditions must improve. Sure, I am driving a car to get to thrift shops so I am not throwing stones.

What do you love about a woman wearing a men’s shirt? And how and where do you imagine your customer wearing A Shirt Story shirt?
First I will say that men and women have bought my shirts. These shirts are kind of a blank canvas. So much comes from the person wearing them.  Because of the shine of the buttons it works anytime of day really.

What do you love about fashion most today? Fashion is such a reflection of our world, socially, culturally and politically.  So when Nicolas Ghesquiere of LV makes a video to the editors and buyers that didn’t make it to his show due to the coronavirus, we see him as more human. Designers and values do matter. Fashion will never be just pure fashion again. But that’s a good thing.

What do you mourn about the current state of fashion, having seen so much over the years? If I hadn’t found a new project, maybe I would be mourning. I am learning a lot and choosing the direction I am heading.  Upcycling really connects with me. Sure I still enjoy dinners with former coworkers and laughing about crazy stories and days of old but that’s it.

How do you like to wear your shirts? What’s your favorite style–stripes, tuxedo, classic shirting? I started with white shirts..classic Brooks Bros. Then I found some tuxedo shirts that I wear with khakis and jeans.  I made some short sleeved–taking the formality down a notch. Now I am into classic banker stripes–they feel so crisp! I tuck mine in or do the half in-half out thing. I do ask for pictures of my “clients”?? if they are willing add them to the Next Chapter on my site as inspiration. The shirts really are versatile (I say as a true salesman!). Buttoned to the top or not, tied at the waist, untucked with a skirt or as a beach cover up. I hope I have taken some of the formality out of the sometimes stricter styles by washing them and altering them. The buttons are the secret weapon. A little sparkle goes a long way.

My uniform is…. Androgynous? Ugh I am falling into the over-used word trap. Shirting, trousers and jackets, laceups or sneakers. Pretty simple and easy to pack!

Thanks for the reminder @rollawazni. Who needs another week to regroup? #reset #takingitslow ...