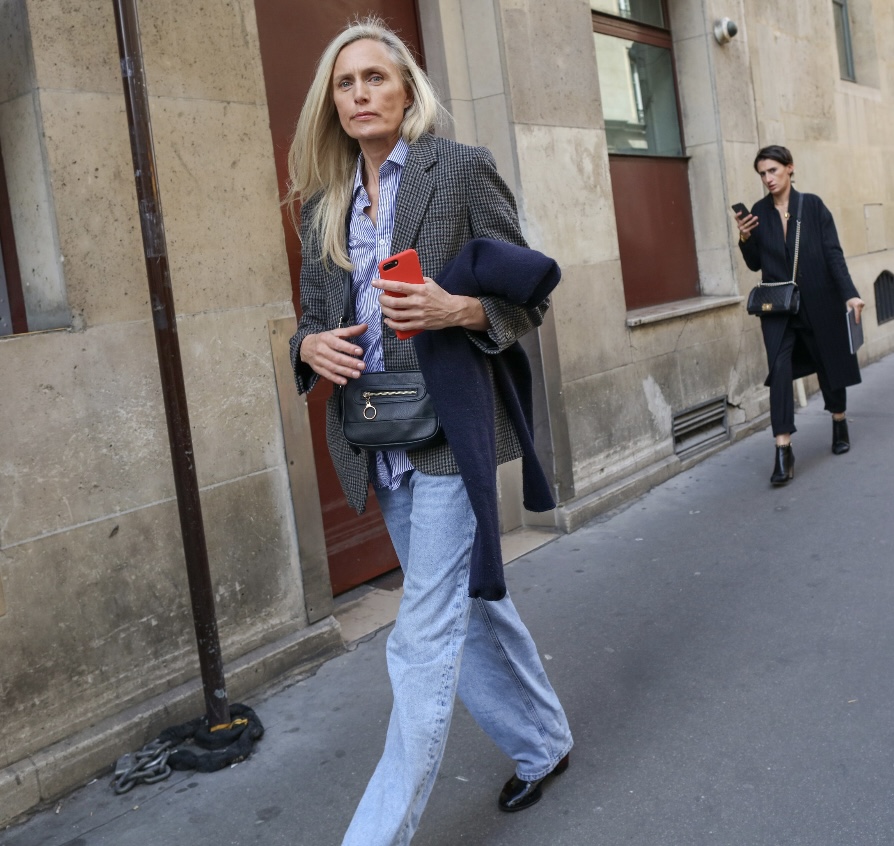 This might sound unlikely, but lately I feel that I am in a bit of a style rut–I want to look at what I have in my closet in news ways, and rethink combinations, because frankly it takes thought and I haven’t had the time or energy to deal. Sometimes it’s the smallest tweak that changes the mundane to something more interesting. These images from Phil Oh on Vogue.com caught my eye.

First up, the woman at the top. I do not know who she is (anyone?), but how chic is she?! While she is wearing very classic pieces, I think it is the slightly undone effect of everything and her loose jeans. I am going to try out these trouser style jeans from Nili Lotan. I already have a plaid Diane blazer from a couple of years back which would work and then a striped button down (or my Micky Paris military shirt).

This is something I’ve been thinking about too, cowboy boots. I love how Emmanuelle Alt is wearing hers with a pinstripe suit. Why not?! I bought a stylized pair from Khaite last year, plus my daughter has a classic vintage pair languishing in her closet (stealing them. Shhh!!)

I saw a knit “bib” at COS today, it was paired under a blazer and I wasn’t sure what to make of it until I saw this image. It’s kind of cool. Especially if you want to block out the wind and layer a blazer or jacket over it. It’s a scarf alternative. I wouldn’t buy one that was more expensive than the one at COS, because you could tire of it. But now I’m intrigued.

Double denim. Nothing “new” here, but it just looks good. Nili Lotan also showed some good double denim for next Spring in Paris (more later). It is also an excellent fall layer under sweaters and blazers, with a sheer turtleneck underneath–limitless options. (Is that Gaia Repossi??)

An oversized blazer. Not going away. In fact, they seem to be getting more exaggerated, like Lauren Santo Domingo’s here. I particularly like ones for next Spring from Miu Miu and Stella McCartney.

Unusual color pops and combinations. I hardly ever wear color and at COS they have a hot pink cashmere crewneck, but I think you have to think outside the box to made it work, like this woman. Instead of black or navy she’s paired it with two shades of green and then red shoes. It’s weird, but it works. Was thinking the COS sweater, Frances de Lourdes army satin pants (I bought the black last year, they are worth it), but then you need the outer layer and shoes. Everything has to be right to get there sucessfully.

And finally this young woman. I don’t know who she is but I automatically thought “young Carolyn Bessette.” It’s the simplicity of her pieces. The bare leg and feminine but quirky shoe. I love the soft colors of her coat and dress. This is elegant.

« These Versatile Pants + A Favorite Style Setter
Weekend Like Jane »